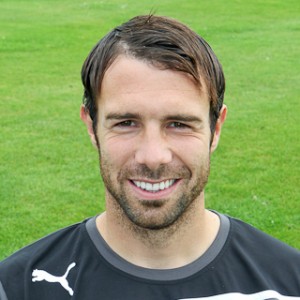 Brentford goalkeeper, vice-captain and all-round entrepreneur Richard Lee names German defender Marcel Eger as the main culprit for dodgy music choice at the club, acknowledging it was perhaps harsh but citing his contribution to the team playlist as the overriding factor in his decision.

A couple of months ago, each player at Griffin Park was required to select a song each to form a compilation and Richard, 29, recalls the standout one chosen by the summer signing from FC St. Pauli.

While it is unconfirmed whether it was the original Depeche Mode version of the song or The Saturdays’ cover it was still sufficient enough for Eger to be the main teammate past or present that Richard thought of for outlandish musical preferences.

“It’s a tricky one but I guess it would have to be Marcel just for that reason, it’s a bit harsh though!”

After pressing for him to name one of his former Watford counterparts for memorable tune choices Richard brought up USA international Jay DeMerit, someone who spoke to this site recently.

“Jay was into some quite heavy stuff, I got some stick for my taste though! At the moment I’m into Ed Sheeran, The Script, Scouting For Girls, that sort of thing.

“The three radio stations I listen to are Magic, Capital FM and Kiss so it’s generally quite mixed. I just had a two-hour walk, which is quite a regular thing, and had the iPod on, it’s one of my favourite ways to raise my state, especially when you’re not feeling so good.

“There are certain tunes I go back to, like Gavin DeGraw’s for example, it was one of his I chose for the team playlist. I’m not sure on the title, it was possibly called ‘I Don’t Want To Be’.

“When I was younger I had a lot of the American influences like Hootie & the Blowfish. My brother Michael also makes music so I like a lot of his too.”

Richard who was born in Oxford before growing up in Bicester, Bierton and Longwick, received his first ever record in the late 1980s and the identity of the band certainly characterises popular music in that particular era.

“It was New Kids On The Block! I’m just trying to work out the dates for how old I would have been, 6 or 7, or maybe a little bit older.”

Brentford defender Leon Legge was only the third player to answer questions for the site, back in June last year, revealing himself at the time to be the man for the pre-game music at the League One side, with 16,000 songs on his iPod.

Fellow Bees teammates Marcus Bean and Sam Saunders later also gave their own interviews but it is Leon who is showing true staying power by still dominating the changing room airwaves on matchday according to Richard.

“It’s still Leon Legge, he puts his iPhone in and plays a lot of things like Drake, which I quite like. I’m not into really heavy kind of grunge, or house, the same with trance as I’ve never really been exposed to it.”

Richard progressed through the ranks at Watford and made his professional debut in the second tier for Ray Lewington’s Hornets in March 2003 in a narrow 1-0 home defeat to Preston North End, a season in which he also helped the second string team win the Premier Reserve League.

He experienced the potentially problematic task of singing in front of teammates while at the Hertfordshire club, going for a popular number by 60s band The Foundations.

“I sang ‘Build Me Up Buttercup’ from ‘There’s Something About Mary’ and just about got through it! Most seem to go for Oasis songs so I went for that as something different.”

The 2003/04 campaign would be frustrating in the extreme and would culminate in him suffering a split humerus bone, being told by a specialist at the time that full extension of his arm would not be possible again.

After spending a number of months stretching against the wall to give him the best possible chance of regaining this extension he returned to play 38 first team games in 2004/05, though a broken cheekbone would rob him of the opportunity to line up in the Carling Cup semi-final against a Liverpool team who would lift the Champions League that season. 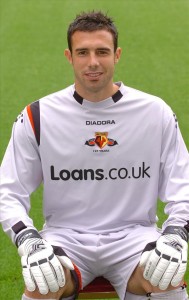 Despite being hampered by a ruptured bicep and torn knee cartilage he would spend the next campaign on loan in the Premier League with Mark Hughes’ Blackburn Rovers, linking up again with his former goalkeeping coach Kevin Hitchcock who was a key instigator in the move.

Richard is known for his many ventures away from the immediate business of playing and in May 2006 he appeared on BBC’s Dragons’ Den with friend Daren Duraidi, persuading Duncan Bannatyne to invest £150,000 in their company Dr. Cap.

As third choice behind the outstandingly consistent Brad Friedel and Finnish stopper Peter Enckelman during his year at Blackburn he would return to Watford the following summer, and during his time off he took it upon himself to improve an area of his game he knew his manager Aidy Boothroyd did not rate.

Setting up the camcorder in the garden at his parents’ house he practiced his kicking from one end to the other and analysed his technique in order to refine his ability, but when picturing this scene I had to wonder just how big the garden was to allow him to do this without breaking windows and suchlike!

“It was just about big enough! It was quite narrow though and I ended up having to go into neighbours’ gardens to pick the ball up at times.”

The 2006/07 season saw Watford now in the Premier League and keeper Ben Foster was back at Vicarage Road for another loan from Manchester United, meaning that Richard would get to at least play against the champions in waiting due to Foster’s ineligibility to feature against his parent club.

As it transpired, he played 14 times that season and three times against United, twice in the league and also in an FA Cup semi-final at Villa Park where Wayne Rooney’s double helped the Red Devils to a 4-1 success.

After relegation, the Hornets mounted a bid to return to the top flight at the first attempt in 2007/08 but despite leading the way early on they stuttered considerably, eventually losing out to play-off winners Hull City in the semi-final. 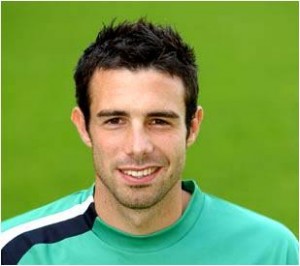 Richard had captained the team temporarily in Jay DeMerit’s absence, with the side winning three and drawing one of his four matches as skipper.

He was restricted to just 11 appearances in 2008/09 despite playing 41 times the previous year, his situation not helped by an old knee injury flaring up during pre-season.

This was the year in which Aidy Boothroyd left his role as manager with future full-time boss Malky Mackay taking over as caretaker before Brendan Rodgers stepped into the breach.

A highlight for Richard was his double-penalty-save in a 3-0 win at Southampton but the next season would see him play in just two Carling Cup ties, prompting the immensely difficult decision he would make to leave the club he had been at since he was a child.

Joining current employers Brentford in summer 2010, last season was unforgettable for him and the story would be told in Richard’s book ‘Graduation: Life Lessons of a Professional Footballer’. 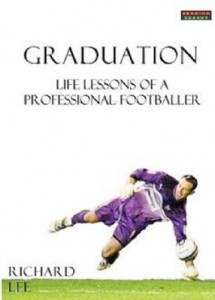 The book outlines his magnificent penalty shootout heroics which knocked Everton out of the Carling Cup, as well as eliminating Leyton Orient, Swindon Town and Charlton Athletic in the Johnstone’s Paint Trophy en route to the Wembley final he would be denied the chance to play in due to a dislocated shoulder.

‘Graduation’ also details his experiences of hypnotherapy in a season where he would win the ‘Player of the Year’ despite beginning it on the bench and missing the last two months of 2010/11 due to the aforementioned shoulder injury.

Richard is often tagged as ‘not your typical footballer’ and it is easy to see why with his dabbles in property renovation, a public speaking course followed by a stand-up comedy performance in Leicester Square, GK Icon , a neuro-linguistic programming diploma, Mona Vie and two more projects in Sporting Connect and Everyone Needs A Mentor.

“Sporting Connect is a really interesting one – a lad got in touch with me on Facebook with the idea that something was missing in the game. It works as a sort of Facebook for coaches, a way for coaches to be reached with their CV online and to have that online communication with them.

“He asked if I’d be interested and with the contacts and links I have in the game I thought it would be great to pass on some of that knowledge. Everyone Needs A Mentor is still in its early stages but the idea behind it is that I truly believe everyone can benefit from someone who has been there, seen it and done it, so that is the real basis of the concept.”

On the field, Brentford are currently 10th under Uwe Rosler and with them 8 points away from the play-offs with 17 of their fixtures still to come Richard believes it is still within their reach if momentum can be built up soon.

“For ourselves the play-offs were the goal, we’ve had a difficult past month and have drifted away a bit. We need a big one but we’ve got a good run-in and some winnable games to turn our fortunes around.

“Personally it’s been good, a strange one in that I’ve not had the indescribable highs that made last season so surreal but it’s been consistent. I’ve not made too many mistakes and to captain the team as many times as I have has been really pleasing.”

One of football’s more inventive characters away from the on-field business, by his own admission Richard likes a good quote so I asked for one of his favourites, and got two, the second of which I always remember as an inspirational one also used in the MTV programme ‘MADE’ a few years back!

“One is ‘he who angers you, owns you’ and the second is ‘a setback is a set-up for a comeback’.”