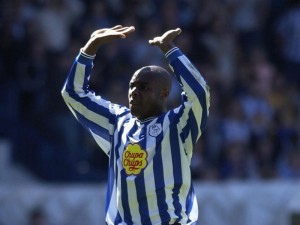 Lloyd Owusu made his name with spells at the likes of Brentford, Sheffield Wednesday and Reading, and now the striker and one-time DJ’s 15-year career has taken him back to Australia for a second spell in Adelaide.

The Slough-born former Ghana international has recently joined White City FC of the Football Federation of South Australia’s Devine Premier League and after hitting the back of the net scoring is still very much on his agenda, even if his decks are now on the backburner.

“A few of my boys did it (DJing) back in the day and I loved watching them mix, I decided to buy a pair of decks back in 1998. I haven’t really DJd for the last four years since having a family, but I do miss it though.”

At 35, Lloyd has shared dressing rooms at 13 different clubs so he has plenty of teammates to choose from when it comes to bad music taste, but the man he names is the very player ex-Reading and USA winger Bobby Convey chose in his interview on here just the other week!

“Marcus Hahnemann at Reading had terrible choice in music, some hard rock, grunge music. My favourite music is r&b, swing beats, soulful house and I also like old school garage.

“Artists nowadays that I like are Drake, Usher, Lil Wayne, a few oldies like 112, Joe (Thomas), Michael Jackson etc. I’m not a fan of rock, country and trance.

“My first record I ever bought was ‘Candy Girl’ by New Edition, I was about 8 or 9. I’ve been in charge of the music at most of the clubs I’ve been at, r&b and garage have been on the menu.

After starting out with hometown club Slough Town he moved into the professional game in 1998, hitting 25 goals in his first season at Griffin Park including three hat-tricks.

He got the goal away at Cambridge United that sealed the Third Division title for the Bees and in the 1999/2000 and 2000/2001 seasons in the third tier (Division Two at the time) he scored 14 goals in each.

The 2001/02 campaign saw him register a superb 22 goals with the winner in the play-off semi-final second leg against Huddersfield Town before Steve Coppell’s side were beaten in the final by Stoke City at the Millennium Stadium.

His consistent form in front of goal caught the eye of Sheffield Wednesday in the First Division and Terry Yorath moved to snap up his services in the summer of 2002 on a free transfer.

Just briefly fast forwarding to 2005, Lloyd would return to Brentford after a spell with Reading and would score 14 in his first season back at the club before injury robbed him of the majority of 2006/07.

The frontman’s time with the club overall saw the most productive spell of his career so far and of course deciding to go back there three years after leaving meant going against a famous old saying. 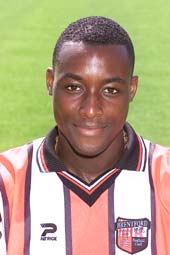 “Brentford was a fantastic time in my career, the best memories were winning the old Fourth Division, League Two now, and being leading scorer in the league. I never had any regrets there.

“It was a bit surreal going back, people always say never go back to an ex-team but I ignored them calls. I would say being at Brentford would have to be up there with the best times in my career, it’s such a great family club with great people on and off the pitch.”

At the end of his first stay with the West Londoners expectations were high from Wednesday fans hoping that he could reproduce his prolific form a league higher with them, but 2002/03 spelled relegation for The Owls.

Lloyd had a tough time with just 4 goals in 33 games that season, although his progress was hindered early doors by injury that had eaten into his settling in period with the South Yorkshire club.

His first appearance came in the Steel City derby of September 2002 in which Wednesday won 2-0, all Owls fans know what I’m about to mention but I’ll let Lloyd tell it!

“All I remember was the ball coming off the cross bar from a (Shefki) Kuqi header and me being there to put it in the net past Paddy Kenny. When I went to Wednesday I missed pre-season due to a knee operation so I was always on the backburner and could never reproduce my best performances.”

Nevertheless that goal is etched into Sheffield derby folklore and also saw the ‘raising the roof’ celebration catch on with Wednesdayites.

After relegation to the third tier it looked like the striking options of Lloyd, Shefki Kuqi, a young and at the time unpolished Grant Holt, and further additions Adam Proudlock and Guylain Ndumbu-Nsungu would serve Wednesday well in their promotion push. 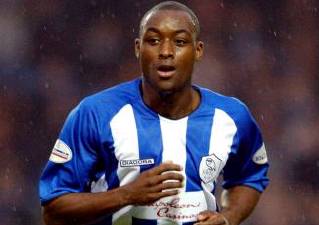 As a thirteen-year-old at the time I even had ‘Owusu’ on the back of my shirt, such was my belief that he would help lead us to promotion in 2003/04!

However, after early form Kuqi left for Ipswich and Lloyd himself departed in the winter for Reading, linking up again with ex-Brentford boss Steve Coppell, and Wednesday finished in 16th place that season.

“Overall I enjoyed myself at Wednesday, the fan base was tremendous and it was a lovely city.”

After 10 goals in 59 games (30 starts) in all competitions he left Hillsborough for Reading, scoring 10 times in a Royals shirt before rejoining Brentford, as mentioned previously.

He scored 12 in 53 games for Yeovil Town before spending the rest of the 2008/09 season at fellow League One sides Cheltenham Town and Brighton & Hove Albion, scoring 8 for Cheltenham and 7 for Brighton.

In 2009 he made his first move to his current home city when he signed for A-League outfit Adelaide United, spending 18 months there before eventually returning to England with Luton Town. 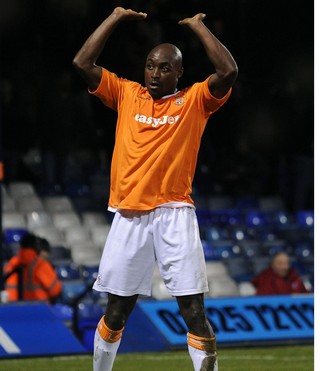 His form with the Hatters was impressive as he scored 7 in 13 games but the team missed out on promotion back to the Football League after losing on penalties to AFC Wimbledon in the play-off final at Manchester City’s City of Manchester Stadium, as it was still known then.

After leaving Luton he ventured to Cyprus with AEP Paphos, a destination known to many for its holidaying appeal more than its football, and Lloyd explains his time there.

“Paphos is a lovely place for a holiday and all, but my footballing experience wasn’t the greatest. The club wasn’t paying the players so I decided to get out of there before the summer window closed.”

He joined League Two Barnet before brief stops at Hayes & Yeading United and his first employers Slough once again.

Lloyd made the move back to Adelaide with White City in March with his daughter and partner Sam Nelemans, a Dutch model who is expecting their second child.

With his UEFA C Coaching Licence already attained Lloyd has a particular burning ambition for his future in football which would benefit a huge number of people if it comes to fruition.

“My aims and goals are to hopefully get a Lloyd Owusu soccer academy running and mentoring kids. Adelaide is a great place to live – the lifestyle is so relaxed and chilled.

“When I was here first I made some great friends and always kept in contact with them. I spoke to Milan Sofranic of White City who is the director of football at the club and when I decided to come back it was an easy decision.”

Lloyd has represented Ghana at international level and was in contention for selection for the 2006 World Cup before injury ruled him out of Ratomir Dujkovic’s plans for the tournament.

His experiences for the ‘Black Stars’ led to him playing alongside a Chelsea midfielder who makes his choice of the 5-a-side team he would put together if he was to choose his best ever teammates, a feature I have brought in for the last couple of interviews.