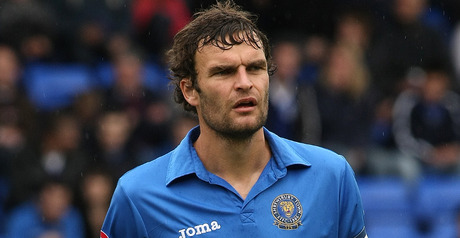 The team recovered from a downturn in form to make the League Two play-offs but were hugely disappointed to miss out on automatic promotion by a solitary point.

Graham Turner’s side ultimately lost out in the semi-final to Torquay United, defeated 2-0 on aggregate by The Gulls.

Player of the Year Ian, something of a rarity amongst his teammates with his musical preferences, says Harrold (now a Bristol Rovers player) chose the pre-match music early in the campaign.

“At the start of the season Matt Harrold used to play some dance music but when results started going badly we changed and had more inspiring and motivational music by people like Faithless.”

Warrington-born and a former Tranmere Rovers and Rotherham United defender, Ian, 30, has been a long-standing fan of indie music, unlike many of his counterparts.

“I have always been into indie, I think I’m in the minority as most of the lads are into r&b. Dave Raven used to listen to Phil Collins which has to be questioned.

“My first gig I went to was with my brother who is massively into his music. It was Black Grape and cast in Liverpool, this got me into music.

“I’ve since seen various artists such as Blur and Arctic Monkeys but my all-time favourite has to be Oasis.”

The first CD Ian ever bought was at the time of the classic ‘Battle of Britpop’ in August 1995 when Blur’s ‘Country House’ went head-to-head with Oasis’ ‘Roll With It’, Blur outselling Oasis to top the UK singles chart.

“The first one I remember was when I bought Blur’s ‘Country House’ when it was a big thing between them and Oasis. I would have bought the Oasis one but it had already sold out.

“I went to Knebworth to watch Oasis and I have been to a V Festival. I always wanted to go to Glastonbury and got the chance last year, it was awesome.

“The line-up wasn’t great but the atmosphere more than made up for it. Also the sun shining helped as if it was rainy and muddy I don’t think it would have been the same.”

Ian made the breakthrough in his career at Tranmere Rovers, making his debut in the 1998/99 season and appearing 183 times for the club before a move to Rotherham United in 2006.

In his time at Prenton Park, Tranmere reached the FA Cup quarter-final in 2000, 2001 and 2004, as well as the 2000 Worthington Cup final where they were defeated by Martin O’Neill’s Leicester City 2-1.

It was the 2001/02 campaign when Ian solidified his place in the team but just being around the club at such a memorable time clearly left him with fond memories.

“I had always watched Tranmere all my life so to play and be involved was brilliant. There was a great atmosphere around the place and all the players got on and socialised off the pitch as well.”

Jamaican duo and former Tranmere teammates Ian Goodison and Theodore Whitmore were two players who Ian spent time with, Whitmore now manages the Jamaican national team while Goodison is still going strong at Tranmere at the age of 38.

“I used to travel in with Ian and Theo quite a bit and some of their music was good. It was all Jamaican but the beat was decent.”

Ian has featured in the PFA Team Of the Year for League Two in the last two seasons, the first with Rotherham and last season as Shrewsbury were left ultimately disappointed.

“For the team we were one point away from reaching our goal but it didn’t happen. It was very disappointing and I think that may have affected our chances in the play-offs.

“Personally I was happy with how I did but I also look back on the season with a few ‘what ifs?’ The players who are now being brought in are of a good standard and they will need to be as the league will be hard this year.

“Our goal will be promotion again and I think that’s realistic.”

Oasis (cover of The Beatles) – I Am The Walrus