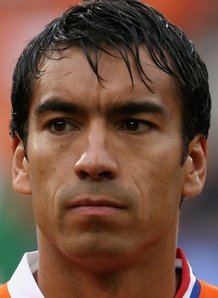 The culmination of ex-Netherlands captain Giovanni van Bronckhorst’s illustrious trophy-laden career played out on the biggest stage of all in the 2010 World Cup final, and the former Glasgow Rangers, Arsenal and Barcelona star took the time to choose his favourite music and more for this site, with one particular love song holding the strongest of meanings for him.

A midfielder who would convert to left-back, ‘Gio’ as he was known in Spain, was pivotal in Barcelona’s Champions League win in 2006 as the only player to feature in all of the competition’s matches that season.

Also a Premiership winner with Arsenal, twice a Scottish Premier League champion with Rangers, as well as a La Liga winner on two occasions with Barca, the Dutchman led a prestigious career at the top level of international and club football.

Playing in no less than five major international tournaments, he won a magnificent 106 caps for his country and all this is without mentioning the nine domestic cups he won in four different nations.

Among the areas of discussion had with Gio was regarding the best player from each position he ever played alongside, a compelling subject considering the simply huge footballing names he has teamed up with.

As ever though we start with music, and it was while the former Feyenoord man was with Rangers that he and his wife Marieke wed, a day etched in their mind of course and this leads to the opening sector of his most-loved music.

“My favourite love song is ‘When You Say Nothing At All’ from Ronan Keating. It is a song that is also a favourite one from my wife Marieke and it takes us back to our wedding in the year of 2000.

“In the dressing rooms of clubs like FC Barcelona and Arsenal they have a variety of compilations and mixes. With the Dutch squad they also have typical original Dutch songs so the players can have their sing-a-long.”

Gio was born in Rotterdam in 1975 and his heritage also comprises of Indonesian and Maluku Islands (an archipelago forming part of Indonesia) origins.

He first joined his boyhood team Feyenoord at the age of seven, the club where he would end a truly distinguished career some eighteen years later, after a few noteworthy moments along the way! 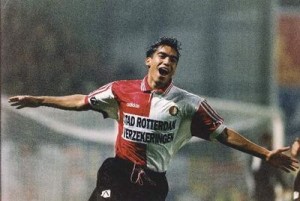 As a fifteen-year-old in 1990 he signed a professional contract with the club, winning the Dutch Youth League the following year.

Opportunities in the Feyenoord first team were scarce at first for the young midfielder so he joined RKC Waalwijk on loan for the 1993/94 season, making 12 appearances in Holland’s top division, the Eredivisie, scoring twice in his debut campaign.

Returning to his parent club for 1994/95 he featured ten times as Feyenoord finished 4th and lifted the KNVB Cup (known also as the Dutch Cup).

It was the 1995/96 season where he would shine, cementing his place as a genuinely accomplished young player, scoring nine goals in 27 appearances as the team came 3rd and reached the UEFA Cup Winners’ Cup semi-final.

August 1996 brought about his first international cap at Johannesburg’s Soccer City stadium against South Africa, a venue where he would also finish his professional career 14 years later in a World Cup final.

Gio would score 12 in 66 games over the next two seasons, the latter of which was Feyenoord’s first Champions League campaign (1997/98) and also the last of his first spell with the club before a £5.5million move to Scotland with Rangers. 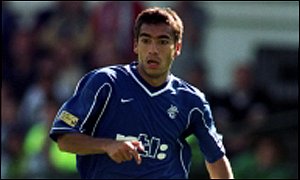 After being part of the Netherlands’ 1998 World Cup squad without playing in France, he prospered at Ibrox winning five trophies in his three years with Rangers.

SPL titles were won in his first two seasons, as well as a League Cup and two Scottish Cups, Gio finishing his Gers career with 22 goals scored and many more contributed to, endearing himself to the Ibrox crowd with his skill and invention.

With Manchester United having won three Premiership titles in a row, Arsene Wenger paid £8.5million to bring Gio to Arsenal as part of his plan to reclaim the league crown. 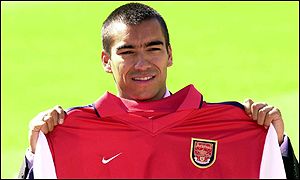 Although his contribution at Highbury was beset by a cruciate knee ligament injury, he played 21 league games in 2001/02 as the Gunners won the title, scoring against Leicester City in January 2002.

The North Londoners also won the FA Cup that year, although he missed out on the final and was an unused substitute in their success in the competition in 2003.

He played a further 20 league games in 2002/03 as the club finished as runners-up to Manchester United, Gio netting against Chelsea in January 2003.

Dutch counterpart Frank Rijkaard took him to Barcelona, initially on a season-long loan in 2003, playing him as a left-back and implementing him as a key component in the team over the season.

Having played sparingly at Euro 2000 and with the Dutch side missing out on World Cup 2002, Gio’s former Rangers manager Dick Advocaat selected him for the national team throughout their run to the semi-final of Euro 2004.

In 2004/05 Barcelona lifted the La Liga title and Gio figured strongly, scoring four times and helping to lay the groundwork for greater success the following season. 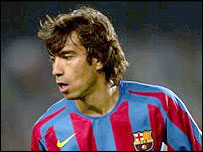 With the Supercopa de Espana (Spanish Super Cup) won, Barca retained La Liga and also triumphed in the Champions League, with Gio playing against his former club Arsenal in the 2-1 win in Paris in the final.

In the 2006 World Cup, he was one of the four players sent off in the last 16 match with Portugal in Nuremburg where sixteen yellow cards were shown.

Netherlands lost the game by a goal to nil and the three others sent off were Costinha, Khalid Boulahrouz and Deco, Gio’s Barca teammate who he sat next to watching the game’s closing moments after both had been dismissed.

The Super Cup was won again in 2006 and in his last season at the Nou Camp, Gio played 23 games in La Liga as the club eventually finished second to Fabio Capello’s Real Madrid by virtue of their head-to-head record.

Gio returned home in 2007 with Feyenoord, becoming captain and winning the national cup for a second time in 2008.

In Euro 2008, he was an outstanding performer in the 3-0 opening win over Italy, scoring the third, also playing the full game as the Dutch destroyed France 4-1 in the next match.

The team were beaten 3-1 after extra-time by Russia in the quarter-final, Gio playing the full 120 and taking over as skipper after the tournament as keeper Edwin van der Sar retired from the international arena.

He played 29 league games in his final season for Feyenoord before going on to South Africa to captain the national team in the World Cup, playing every game as the Dutch accelerated out of the group with three wins before beating Slovakia and Brazil in the knockout phase.

In the semi-final Uruguay were defeated 3-2 and the first goal on eighteen minutes was simply fantastic, scored by the man himself (shown below).

July 11th 2010 marked the final chapter of Gio’s playing career on simply the biggest platform of all, the World Cup final, with around 700 million watching worldwide.

Edson Braafheid replaced Gio after 105 minutes, before Andres Iniesta won the game for Spain on 116 minutes, denying the fairytale ending to Gio’s career but failing to detract from the pride gained.

The last act came in a specially arranged farewell game in front of his own supporters and people at De Kuip as Feyenoord hosted Mallorca, as he played in midfield to mark how he started his 17-year-career.

Last year he was inducted into the Netherlands’ Order of Orange-Nassau, similar to the Order of the British Empire.

After a year coaching the Dutch Under-21s, Gio has this season taken over as assistant at Feyenoord under boss and former teammate Ronald Koeman, something he says he is feeling good about.

“I’m very optimistic, we are working together with a young group of talented players and our results are not that bad (4th after ten games). I hope to achieve great results with Feyenoord after the last few disappointing years.”

Teammates over the years for Gio include some of the game’s very best, so I asked him to choose the best from each of the four main positions, not an easy task at all but he managed it!

“The best goalkeeper is Edwin van der Sar. The best defender for me is Carles Puyol from FC Barcelona.

“The best midfielder is my former Rangers teammate Claudio Reyna and the best striker I’ve worked with is Dennis Bergkamp.”

High praise indeed for those four when you consider that Gio’s ex-colleagues include the likes of Lionel Messi, Ronaldinho, Xavi, Iniesta, Thierry Henry, Frank de Boer, Clarence Seedorf and so many more.

Gio ranks third in the Dutch national team’s most-capped players ever with 106 appearances, behind Frank de Boer with 112 and Edwin van der Sar with 130.

A fitting note to end on is the man’s favourite memories from a glittering playing career, so here they are.

“Playing the World Cup final in 2010 in South Africa was a big achievement. My goal against Uruguay in the semi-finals too.