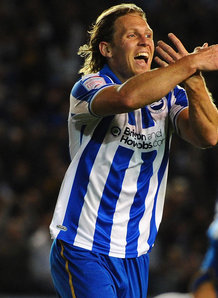 Since striker Craig Mackail-Smith made the step into the Football League six years ago his penalty area prowess has made him a household name but music gave the Brighton & Hove Albion man the chance for some brief anonymity in amongst some festival revellers.

The former Peterborough United promotion hero’s industry on the pitch has ensured he has been able to enjoy the trappings that come with the status of a footballer but his unequivocal support for numerous charities has meant that he has never quite lost touch. Despite this, the 28-year-old who has contributed 11 goals for Gus Poyet’s Championship promotion chasers this season did find it something of a welcome novelty being able to blend back in with a crowd of like-minded rock music enthusiasts, as he explains.

“I went to Download festival in Donnington about four years ago. I stayed in a tent and did the whole proper festival.
“Nobody realised who I was as everyone was just enjoying themselves. It is great when you are recognised but nice just to fit in sometimes.’’

The Watford-born Scotland international has netted 30 goals in his two and a half years at Championship level with Peterborough and Brighton altogether and he is the Seagulls’ leading scorer so far in 2012/13. The idea of how music can help to galvanise a group of players no matter how diverse the individuals may happen to be has been one of the biggest areas I have looked at on this site since it began.

Craig is the 125th interviewee on here and his response to the question of the pre-game songs of choice in the Brighton ranks seems to indicate that they are a demanding group of players from a musical perspective! As with numerous clubs in the top two levels of the English game there is an intriguing mix of personalities and cultures at the Amex Stadium, led by a prominent Uruguayan in the manager’s position of course.

This means that the formula for the ideal dressing room playlist is still being sought but Craig is working with what he has at present!

“It is my iPod at the moment but for the dressing room I have dance music and stuff like that so it gets the boys going, but I get a lot of stick! However, no one else steps up!
“Previously, (Íñigo) Calderón had a bit of Spanish music and we were on a good run so he was in charge for a while. Casper (Ankergren) was in charge of the tunes as well but it was rock music and that got booed off fairly quickly.’’

The mention of Casper Ankergren leads into Craig’s own personal tune selections and although he may not share all the same favourites as the Danish goalkeeper there is a shared liking for the more robust genres!

“I like anything really but mainly I like a bit of rock and heavy metal. There is not one in particular but the Foo Fighters are up there for their variety in songs as they have different styles, some are heavy, some are slow.
“There’s nobody I really dislike because I like all types of music so if I hear a song I will make a judgement call on it alone.’’

Prior to his move to Sussex, Craig spent four and a half years with Peterborough and it was certainly a time of considerable progression and a whole host of unforgettable moments. Signing from Dagenham & Redbridge in January 2007, he stepped up a division into League Two and would enjoy promotion with Darren Ferguson’s side as runners-up in 2008.

Craig had struck up a great partnership and understanding with fellow frontman Aaron McLean, a signing from Grays Athletic, and Posh were promoted once again the following season after finishing 2nd in League One. It had been a particularly swift rise from League Two to the Championship for the London Road club but the adjustment to life in the second tier was not quite so smooth.

Craig’s 11 goals were not enough to help keep Posh in the Championship and they suffered relegation back to League One in 2010 with manager Ferguson departing during the campaign. 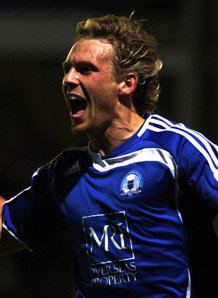 Although relegation was a setback for Peterborough the following campaign was eventful for all the right reasons. Gary Johnson had come in as manager following Mark Cooper and Jim Gannon but he left in January 2011 and it would be Darren Ferguson who would return following an unsuccessful time at Preston North End. Craig’s own form in 2010/11 was magnificent throughout as he hit 35 goals including one in the League One play-off final as Posh beat Huddersfield Town 3-0 at Old Trafford to return to the Championship at the first attempt.

He left that summer for Brighton amid much interest in his services and is extremely fondly remembered by his former supporters. In his interview on here last season, Peterborough and DR Congo defender Gabriel Zakuani named midfielder Grant McCann as the team DJ and Craig looks back at those dressing room playlists.

“It was quite old school so it was pretty good, I really liked it. Here we have a big Spanish influence and we didn’t have that at Peterborough so it was very much the usual dance and garage music.’’

As people grow up there are many areas of interest and life in general that are affected by others and Craig gives an insight into who helped him on his way to being a Championship and international striker as well as those who played a part in shaping the edge to his music choices.

“(In football) my Dad and my Grandad played a massive influence by taking me everywhere, buying me boots, believing in me and being relaxed, not pushing me, and telling me to make sure I enjoyed myself. (The music influences were) probably my friends from back home, they were into rock and metal so we used to hang out and they got me listening to stuff.
“I would say it was them that put me onto a lot of music I liked.’’

As things stand in the Championship, Brighton head into this Saturday’s trip to Sheffield Wednesday in 7th place with 18 games remaining. There is a five-point gap separating them from Middlesbrough in 6th and the play-off places and although Craig’s three promotions in the Football League have been in lower divisions he is encouraged by the prospect of adding another come May.

“We have a good chance because we are there or thereabouts now. The league is still wide open and if we can go on a good run then we can be in those play-offs come the end of the season.’’ 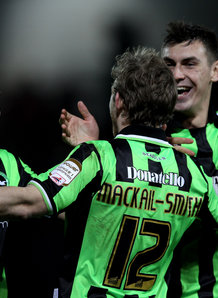 While promotion to the Premier League and forcing his way into new Scotland manager Gordon Strachan’s plans will be on the agenda for Craig in the next three months he took a look back over some of the players he has shared a dressing room with over a career that started with his youth team days at St. Albans City. The way this regular question works is for the player to choose a 5-a-side team (including themselves) made up of the best teammates they have worked with in their time in the game.

It is very much down to them with regard to how they interpret the question and whether they focus solely on ability, personality or their own understanding with the players they choose. In Craig’s team we have a duo from his Peterborough days, both of which were mentioned earlier, a former Valencia winger with a UEFA Cup winner’s medal and two La Liga titles on his CV, and a goalkeeper who provided some lively moments in his career alongside one or two dance moves here and there!

“(Goalkeeper) from Dagenham, Tony Roberts for his entertainment value and just to wind up the crowd. (Defender) Gaby Zakuani from Peterborough, he throws himself at everything and has no fear.
“(Midfield) Vicente – he is a class above which is why he has 40-odd caps for Spain. (Striker) Aaron McLean – as we scored lots of goals together.’’