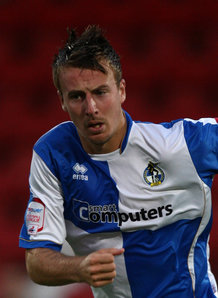 Bristol Rovers midfielder Chris Lines has risen through the ranks at the Memorial Stadium in recent years, securing a regular starting place and also a slot as the team’s pre-match DJ.

At 25, Chris has made 189 appearances in all competitions for The Pirates, scoring 23 goals after making his debut in January 2006.

Bristol-born, he came through the Bristol Academy of Sport at Filton College which has a partnership with the club, eventually grabbing a central-midfield spot with the Gas.

With only skipper and recent caretaker manager Stuart Campbell (signed in 2004 from Grimsby Town) able to rival him when it comes to years spent at the club it is perhaps only fair that Chris currently has reigns over the dressing room music.

“I am the dressing room DJ and I try to please everyone! I play a lot of David Guetta, LMFAO etc.

”It’s mainly dance tracks but anything popular in the charts that is suitable for before a game I add to my playlist, which is shit hot if I may say so myself!

“My favourite genre of music though is hip-hop with Lil Wayne, Drake and Rick Ross my three best. Warren G ‘Take A Look Over Your Shoulder’ was the first album I bought.”

With all three of his favourite artists featuring on DJ Khaled’s ‘Im On One’ it is understandable that the track is currently Chris’s ‘song of the summer’.

“I like anything on the new Rick Ross mixtape, (Lil Wayne’s) Tha Carter IV is coming soon so a lot of the current hip-hop is on fire!”

“A lot of the older guys don’t take much interest in my music but there aren’t so many of them nowadays!”

Trip-hop duo Massive Attack and drum and bass master Roni Size head the list of acts to originate from Bristol and Chris has some links to others in the city’s musical scene.

“One of my best mates makes music in Bristol so I take a shine to all his stuff and help him to promote it. Also a good friend, Jinxsta JX has been around the Bristol music scene for a while as well as producing some very good tracks.”

“Drake at Hammersmith Apollo was by far the best concert I’ve been to. However, Zane Lowe’s DJ set in Majorca was also unreal.”

Last season saw Bristol Rovers fall through the relegation trap door to League Two, but despite recent speculation linking him with a move to Crystal Palace, Chris is confident about Rovers’ chances of promotion.

Paul Buckle has recently took the manager’s hotseat at the club after four years at Torquay United where he guided them to promotion to the Football League and the League Two play-off final last season.

“Promotion looks very promising,” Chris said. “However I know how hard it is to get out of League Two.

“I hope to keep performing well and play at the highest level I can achieve and always seek success.”