Republic of Ireland striker Andy Keogh brought the curtain down on a decade in English football last year, ushering in a new adventure and alluring surroundings with Perth Glory in Australia, although the distinctive chimes of back home are as fresh in the mind as ever.

After a spell with Leeds United as a teenager, the Dubliner first rose to prominence with Scunthorpe United, helping the Iron on their ascent to the Championship. Andy had moved to the second tier with Wolverhampton Wanderers in January 2007, a few months before Scunthorpe’s promotion to that level, and it was while he was at Molineux that he would reach the Premier League.

Although the 28-year-old’s time in the top division was somewhat fleeting, his later stints with Cardiff City, Bristol City, his former club Leeds, Millwall and Blackpool were all in the Championship. There have also been 30 caps for Ireland, won during the tenures of Steve Staunton and Giovanni Trapattoni, with two goals in his country’s colours.

Following his departure from Millwall last May he thought long and hard over his next move. Despite offers from Championship clubs, Andy has spoken of how he was yearning for a change and when the lure of Australia presented itself it was ultimately too attractive a proposition to resist.

It was Perth Glory who came calling and the desire from both parties to complete the deal has so far proved vindicated. Nine league goals from Andy have gone a long way towards propelling Kenny Lowe’s team to the top of the table and he has settled quickly Down Under.

With family already living in Perth prior to his move, the decision to head to Western Australia with his wife and daughter was made even easier. Exploration of the player’s musical side is the way with each interview on here, and although Andy’s focus is on the here and now, discussion of which career teammate he would pick to record a song cover with led him all the way back home.

Although they became senior international colleagues, Andy was with this Hull City defender long before the professional dream became reality, at St. Joseph’s Boys Club.

“I would choose a good friend of mine, Paul McShane, because he likes the same music as me. We’d probably rock a song like ‘Dublin in the Rare Ould Times’.”

Having an Irish international in the ranks is something Perth Glory have experienced before, as one-time Manchester United midfielder Liam Miller represented the side from 2011 to 2013. Andy made his debut against Ecuador at Giants Stadium in New Jersey in 2007 and scored his first goal as Ireland drew 1-1 with Serbia at Croke Park in Giovanni Trapattoni’s first match in charge a year later.

He always wanted to take his life to a warmer climate but even on the sun-drenched shores of Perth you can hear echoes of his homeland coming from his music collection. He alludes to them along with some American acts as he describes his best-loved styles and performers.

“My favourite artists are Mumford & Sons, The Lumineers and Christy Moore. Folk music and traditional Irish are my favourite genres. 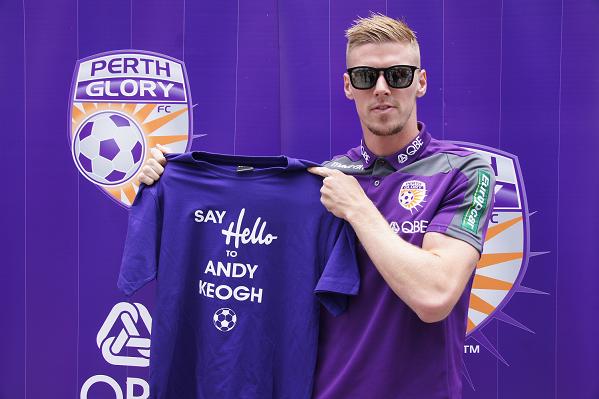 The PFA A-League Player of the Month for December, Andy has been a key part of a Glory team that has salvaged something from six games in which they have fallen behind this season. After finishing 8th in 2013/14, the improvement has been dramatic and 12,271 were at nib Stadium to see them stage a late fightback from 3-1 down to draw with title rivals Melbourne Victory on January 25th, with Australia Day (January 26th) celebrations in the air.

Andy netted a penalty in that draw but there was no such comeback for ten-man Perth in Saturday’s 3-1 home loss to Sydney FC, who ended the match with nine men. Nevertheless, hopes are high heading towards the latter stages of the season and undoubted spirit runs through the side.

The team’s left-back, who once had a spell with Bolton Wanderers, signed a new two-year deal last month and he is also doing his bit to keep the mood right as kick-off approaches, as Andy explains.

“Scott Jamieson is team DJ at the moment and he’s doing a good job. I have never been the DJ as my music is more calming and we usually play hip-hop and dance music.”

It was Scunthorpe manager Brian Laws who gave Andy his first start in professional football, in a loan from Leeds at the beginning of the 2004/05 season. During that campaign, he made his solitary appearance for his parent club against top-flight Portsmouth in the League Cup and also spent time with Bury before a permanent move to Scunthorpe in February 2005.

After promotion with the Iron to League One, his best scoring season in his career so far came as a 19-year-old in 2005/06 as he struck 15 goals, building an extremely productive partnership with Billy Sharp (24 goals). In January 2007, he linked up with former Ireland boss Mick McCarthy at Wolves, where he would win promotion to the Premier League in 2009.

As Wolves closed in on their return to the highest level, Andy scored twice in a 3-2 win at Derby County in April 2009, with an 87th-minute header to win the match. That sent them six points clear at the top of the table and promotion was clinched five days later as Andy set up Sylvan Ebanks-Blake for the winner against Queens Park Rangers at Molineux.

Although Andy would go out on loan to Cardiff City, Bristol City and Leeds during his five years at Wolves, he did secure a vital three points with his winner at Wigan Athletic in August 2009. That was Wolves’ first goal back in the Premier League and they went on to stave off relegation.

One player who saw plenty of league action that season was Marcus Hahnemann, the American international goalkeeper who recently retired at the age of 42 following a spell back home with the Seattle Sounders. The ex-Reading favourite is well-known for his distinctive music taste and he has been singled out for it many times in interviews with his past teammates on here.

As Andy thought back over the memorable musical preferences from those he has played alongside there could really only be one standout.

“Marcus Hahnemann, our goalkeeper at Wolves, was into really heavy metal stuff and would blare it out while doing air guitar. It really wasn’t my cup of tea!”

In October 2012, Ireland hosted Germany at Dublin’s Aviva Stadium in a qualifier for the 2014 FIFA World Cup, a tournament which the Germans would of course go on to win. The result was an emphatic 6-1 in favour of the visitors but the consolation goal came courtesy of Andy as he headed beyond Manuel Neuer from Robbie Brady’s corner.

The pride at representing the Irish has always been felt strongly by Andy and although he has not been selected by Martin O’Neill since his appointment – and he acknowledges his chances are further lessened by moving to Australia – he would still love to step out for The Green Army again one day. Winning 30 caps for your country is an undoubtedly admirable achievement and Andy’s time in the squad also provided him with the chance to witness one of his striking colleagues on the guitar.

“Shane Long, who plays at Southampton now, produced an unbelievable performance of Bob Marley (and the Wailers) ‘No Woman, No Cry’. It was memorable because no person expected this country boy to produce that.

“Many a time I have had to sing. I always sing an Irish song and it usually goes down pretty well; being Irish, we like to sing.”

In January 2012, Andy signed for Millwall from Wolves, showing terrific early form with the Lions as he hit ten goals in his first 18 games. When it came to leaving the South Londoners last May there was plenty to take into consideration when planning his next move.

As well as the footballing factors, he made a life decision to venture to Australia and at 28 he has taken in a lot from his years in football. If he could go back and share some advice with the teenager who was finding his feet in the sport and in life, what would he say to the Andy Keogh of back then?

“I’d say, ‘Don’t be so naive, and take everyone on face value’, as football has shown me a lot of different characters, and I’d also say to train harder.”

Only Wellington Phoenix’s ten-goal striker Nathan Burns has been more prolific than Andy and Melbourne Victory’s Besart Berisha in this season’s A-League. Although he will undoubtedly want to take the Golden Boot, sealing AFC Champions League qualification and going all the way to Grand Final success with the team are Andy’s biggest objectives.

With the UK in the midst of a particularly cold snap of winter weather at present, Andy could certainly be forgiven for not missing the routine he has been used to for so many years. Discussing his time off the field, he tells how a Glory midfielder once with Notts County and Derby may be sharing some downtime with him in the near future.

“Australia has been amazing so far. I’m loving the beach and having a barbecue – quite easily pleased I am!

“I enjoy golf, I’ll hopefully get into some fishing soon too with my uncle and Ruben Zadkovich.”

Contributing five goals as Perth made it to the FFA Cup final before a narrow defeat to Adelaide United, Andy has proved a sterling addition to the Glory and to the A-League. His days in the top tiers of English football and at international level are of significant benefit to the club and it is time to draw upon that as we conclude the interview.

Every player to feature on the site is asked to briefly become a fantasy 5-a-side player-manager and to select four of their best career teammates to join them in this line-up. For Andy, there are international counterparts, as well as representatives from the club where he made his mark and also the team he went to the Premier League with.

“Joe Murphy as goalkeeper. He was with me at Scunthorpe and as well as being a great keeper he was like another defender with how good his feet were, so he would be perfect for a 5-a-side team.

“In defence, I’d have Richard Dunne. The guy is the best defender I’ve ever played with or against and he nearly single-handedly stopped Russia scoring in Moscow (versus Ireland in a Euro 2012 qualifier).

“In midfield, I’d have Karl Henry – our time at Wolves together was very memorable. As a player, no one covered more ground than Karl and he quickly established himself as a regular in the Premier League.

“To partner me up front, I can’t look past Robbie Keane. The guy is just a born finisher and leader, with his goal record speaking for itself.”