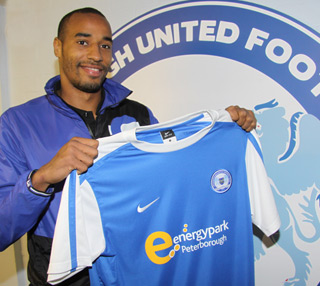 Peterborough United striker Tyrone Barnett took League Two by storm before his first foray into the Championship late last season, and with his aim for more goals having him looking to the future he is finding a way to take it back to the old school via his music.

It was a tally of 15 strikes to help Crawley Town in their eventual promotion to League One that prompted Peterborough boss Darren Ferguson to step in and make the highly coveted 26-year-old a Championship player in February. He responded with goals against Blackpool, Ipswich Town and Reading, following one on his debut away at Doncaster Rovers, as The Posh successfully preserved their place in the second tier. His on-field contribution was immediate with that effort at The Keepmoat Stadium but he was slightly less assured with his inauguration procedure in front of the team, as he explains.

“It was an old song, ‘girl I want to make you sweat’ (‘Sweat (A La La La La Long)‘ – performed by reggae act Inner Circle), I was very nervous and it wasn’t the best.”

That track may be strictly reggae but the DJ namechecked by Tyrone is one of those strongly associated with the UK garage era from his days on stations such as Kiss 100 FM and his ‘Pure Garage’ compilation CDs.

“I would have to say my favourite is old school garage, DJ EZ (once known as ‘Eazy’ before the pronunciation of his name became ‘E-Zed’). I can’t stand really hardcore rock or metal music.

“Red Hot Chili Peppers would be a nightmare for me. Chris Burton, the physio, plays it a bit and I can’t stand that type of music!”

Perhaps surprisingly, Tyrone’s first ever record bought came fairly recently, and it is one that ranks among my own personal favourites from recent years as the debut studio album from one of hip-hop’s biggest emerging stars in the last couple of years especially.

“The first CD I bought was only last year and it was the J. Cole one (‘Cole World: The Sideline Story’). I have only been to one concert and that was 50 Cent – not a bad one to go to.”

In and amongst the Peterborough squad is a hardened defensive battler who gave his own interview on here last November and he was the player Tyrone brought up when the question was asked of whether he or any fellow pros he knows makes music.

“When I was at school I was in a steel band. Gabriel Zakuani is a bit of a producer and loves his music.

He may not have been overly complimentary about his own singing but Tyrone was suitably impressed by one of Posh’s summer recruits, a teenage frontman who became Coventry City’s youngest first team player at 16 years and 21 days in August 2010.

“So far I would say Jonson Clarke-Harris has been the best – he was unbelievable. He performed ’21 Seconds’ by So Solid Crew in front of the lads in Portugal and it went down a storm.”

Tyrone was Birmingham-raised and received his grounding in the game at West Bromwich Albion’s academy before being released as a youngster. He regrouped to build his reputation in non-league football, starting with another Midlands club Rushall Olympic in 2005. His career continued fairly close by with AFC Telford United and Willenhall Town before his name began to circulate to a greater extent after superb scoring form at Hednesford Town.

It was Macclesfield Town who gave him his chance in the Football League in 2010 and he rewarded Silkmen manager Gary Simpson with a steady return of 13 goals in his one and only season at Moss Rose before newly-promoted Crawley Town secured his services last summer. The 15 goals he hit before his move to Peterborough earned him a place in the 2011/12 League Two PFA Team of the Year despite him leaving the division in February. His seven-figure move to London Road broke Posh’s transfer record and also became the biggest fee ever paid in exchange for one of Crawley’s or indeed any League Two player ever.

Tyrone netted four times in the 6-0 pre-season victory at St. Neots towards the end of last month and he is in good spirits as the team prepare for their season opener in the Capital One Cup at home to Southend United on August 14th. The league campaign for Darren Ferguson’s side kicks off away to Leicester City on the 18th of this month and Posh have been boosted by the likes of Torquay goalkeeper Robert Olejnik, Stevenage midfielder Michael Bostwick, winger and ex-loan favourite Nathaniel Mendez-Laing and Dundee United midfielder Danny Swanson. Tyrone describes family as the most important area of interest to him away from the game and he is targeting a continuation of the upward progression his career has experienced in this decade so far. 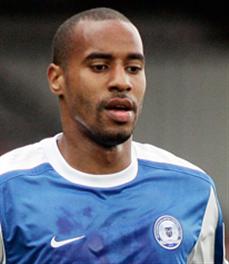 “I am very much looking forward to the season starting, I feel very fit and I have had a good pre-season. We are just focusing on the first game of the season and it is all about getting results now.

“It is always going to be a difficult season in the Championship, but I think we are definitely capable of staying in the division and even pushing up the table.”