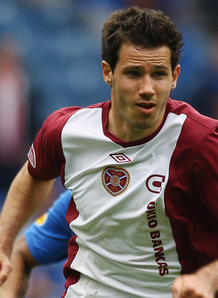 Despite his Scottish parentage and five years at Hearts, Australian defender and midfielder Ryan McGowan still very much doubts the quality of some music tastes within the team at the Edinburgh club, with the homegrown players the worst offenders!

“We use Lockie’s iPod who downloads the music we ask for, we just tell him songs he should download for the weekend. Most of it is dance music to get us going for the game, there are some rap songs in there too for the paper gangsters in our team!”

There seems to be a homegrown feel to the names mentioned by Ryan for questionable music taste, although technically one of the three is English-born!

“There’s a few people who are bad for music, David Templeton and Danny Grainger (born in Penrith, Cumbria) are always listening to happy hardcore! Ryan Stevenson has his music loud enough in his headphones that the whole bus can hear it!”

Ryan grew up in Adelaide, playing as a youngster just north of the city with Para Hills Knights as well as spending time with the South Australian Sports Institute Football Program.

Although raised in Australia the nationality of his heritage certainly featured in the music he heard growing up!

“Rod Stewart was my mum’s favourite along with Wet Wet Wet so that was played a lot at our parents’ parties!

“My favourite music would be either dance or r&b. I couldn’t say I had one favourite, I like all kinds besides heavy metal, I can’t stand that.

“‘Show Me Love’ is a favourite with a lot of my mates back home! That’s the number one song, there’s a lot of others, too many to mention!

“I think my first single bought was ‘Pretty Fly (For A White Guy)’ by The Offspring! I was just going with the flow there, strange choice I know!”

In 2006 he moved to the Scottish Premier League with Hearts, a necessary step to continue his progression, although of course it meant making the move across the world as a teenager.

“I moved by myself, I’ve wanted to play football all my life and have always loved watching as many games as I could. It wasn’t too bad to adapt as I was enjoying the chance to try and make it at a club overseas.

“The biggest changes would obviously be the weather and lifestyle over here! Everyone here is none-stop with everything whereas in Australia people are a bit more laid back.

“The plus side is when it comes to football the fans are so passionate about their team.”

Ryan’s younger brother Dylan, a defender and Australian Under-20 international, joined Hearts two years later and is currently on loan at A-League side Gold Coast United.

It was the final game of the 2007/08 season when Ryan made his Hearts debut, in a 1-0 defeat at Gretna, in a campaign which was a poor one by Hearts’ standards as they finished 8th.

He gained valuable loan experience in 2009/10 with Ayr United of the First Division, making 30 appearances in all competitions and scoring once, although the team suffered relegation on the last day.

Ryan featured regularly at right-back while with Ayr, although centre-back and central midfield have generally been his more frequent career roles.

“The main things to adapt to (when playing right-back) would be more positional sense really, where I should be when we don’t have the ball etc.”

Last season brought a loan spell again in the second tier, this time with Patrick Thistle where he played seven times, he also gained more experience in the season back at Hearts with eight SPL appearances.

The close season was a hectic one as Ryan was away with Australia’s Olympic team in the qualifying games for the 2012 games in London.

The team comfortably defeated Yemen 7-0 on aggregate and will compete in a group with Iraq, Uzbekistan and the United Arab Emirates for a place at next year’s Olympics.

“Hopefully we qualify for the Olympics next year as it would be great to play in such a big event. We have a very tough group though so it will be a challenge, but one we are looking forward to.”

The opening game of Hearts’ SPL season this year saw them take a point away from their clash with Rangers at Ibrox, with the game finishing 1-1 as Ryan won the Man of the Match award from right-back.

“The Rangers game was great to be involved in with it being the first of the season and playing well helped me gain some confidence for the rest of the season.”

He played in both legs of the Europa League qualifying tie with Hungarian side Paksi SE as the Jambos triumphed 5-2 on aggregate.

In the league he also started in defeats against Dundee United and Motherwell, as well as coming on from the bench in the 3-0 home win over Aberdeen.

Ryan was an unused substitute in the 5-0 Europa League defeat at Tynecastle to Tottenham Hotspur but got his chance in the return at White Hart Lane, performing solidly in a creditable 0-0 draw.

Given the stature of the opponents, who despite giving youth a chance also included Roman Pavlyuchenko, Tom Huddlestone and an experienced defence, the night was a very memorable one.

“It was amazing to play against a great team like Spurs at White Hart Lane. It made it even better with the 4,000 Hearts fans being there making it a great atmosphere and it will be a game I will remember for a long time.”

At 6 foot 3, Ryan has the physical stature on his side and is out to cement his regular place after drawing praise of late for his performances.

Hearts are still the only side since the SPL’s inception in 1998 to break the stranglehold of the Old Firm, finishing second to Celtic in 2006 after having led the way in the early throes of the season.

Indeed the club are currently third in the overall table of the SPL since it began and under the new management of Paulo Sergio progression towards narrowing Rangers and Celtic’s dominance is of course a key objective.

“We are aiming for third and to try and get as close to the Old Firm as we can. We feel we have a strong squad with good competition for places which will hopefully set us up for a successful season.”

Hearts host bitter Edinburgh rivals Hibernian this Sunday and will be wanting to extend their great recent form in the fixture which has seen them win four and draw three of the last seven meetings.