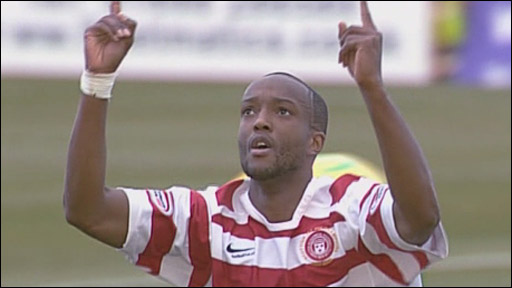 With a career so far encompassing spells in Turkey, South Korea, Belgium and Sweden, striker Richard Offiong is well-versed when it comes to experiencing different cultures and musical tastes.

Starting out in his native North East with Newcastle United, the South Shields product appeared three times for the England Under-20 squad in 2002, also spending time on loan with Darlington, Motherwell and York City.

Leaving the Magpies in the summer of 2004, he spent time in Belgium with Patro Maasmechelen either side of very brief spells with Istanbulspor in Turkey and Chunnam Dragons in South Korea.

First team opportunities were limited at Doncaster Rovers before Richard enjoyed the most fruitful period of his career to date with Hamilton Academical, scoring 43 goals for Accies and playing in the Scottish Premier League along the way.

“When I was up in Scotland the music in the dressing room was the total opposite to when I was away with the England team.

“Playing in different countries has probably made me more receptive to other forms of music and films. It definitely altered my taste in music by playing overseas, even if I don’t understand what they’re saying I can get a feel for the song whereas I probably would have dismissed it before.”

In August 2009 he was signed for £75,000 by League One Carlisle United, a loan spell with Swedish side Ostersunds ensued but was curtailed by injury.

After a second loan at Darlington Richard left Carlisle in January 2011, going on to stay in the North East with Gateshead of the Blue Square Bet Premier.

Spending a considerable portion of his career in this part of the country, he speaks highly of the musical talent on offer in the region.

“There’s some great bands coming out of the North East, some which have achieved the very top honours in music. There’s some great emerging talent, a guy called Baron Von Alias recently performed at Radio 1’s Big Weekend so there’s definitely talent up North.”

With such a well-travelled CV it is hardly surprising he has a somewhat diverse appreciation for musical styles.

“My favourite genres of music are neo soul, old school garage, soulful house as well as dubstep, disco, funk and indie. The first single I bought was Wonderwall by Oasis.

“The best thing I like about music is how it makes you feel, a good song can instantly change your mood for the better.

“The state of the UK mainstream is dominated by the same dance / house tracks, there’s no rules to music, I might find it terrible but it might be someone else’s masterpiece. I just hope the music scene allows the non-pop-manufactured artists the time to shine.”

Away from football and music he also shares a particular interest with his partner Carly, as well as pursuing another possible career route into law.

“My missus is in the fashion and make-up industry, over the past four years I’ve become her personal photographer. It’s something I’d like to pursue more if I had the time.

“I’ve been studying law part-time from home, I’m not sure if I want to be a lawyer I just hate sitting around wasting time. I need to be active constantly, after training we get a lot of free time, I’m not one for playing FIFA for hours on end.”

Now 27, he has recently signed for Victorian Premier League team Oakleigh Cannons in Australia after leaving Gateshead at the end of the 2010-11 season.

“Their season finishes in two months time and I’m looking to find a new club after that. Since I hadn’t played as much football over the past two seasons I didn’t feel like I needed a summer break.

“It’s started promisingly and hopefully it will lead on to something bigger and better. I had a great time up in Scotland and I need to rediscover the form I showed up there for my career to kick on to the next level.”

Some of Richard’s favourite songs:

Roy Ayers – Everybody Loves The Sunshine

Dennis Ferrer – How Do I Let You Go?