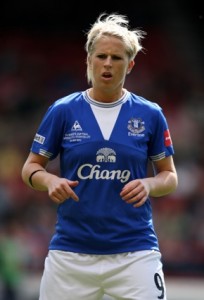 England striker Natasha Dowie has this week made the short move from Everton to Liverpool Ladies and the FA Cup-winning hero from 2010 leaves with five years of memories, including a 90s boyband-inspired effort on foreign shores!
Many recognise Natasha’s last name as she is the daughter of former defender, coach and Crystal Palace Director of Football Bob Dowie, as well as the niece of ex-Northern Ireland striker and Premier League player and manager Iain. However, Natasha, 24, has made her own way in the game over a number of years, with both playing and coaching, combining this with the ‘real life’ responsibilities that come as part and parcel of the role as a women’s player in the UK. After standout moments including winning full international honours as well as her elation-inducing extra-time winner to secure Everton the FA Cup in 2010, she has this week decided to move on to Liverpool Ladies. As this new opportunity opens for Natasha she can leave Everton with many times to savour, although how highly she rates this one in particular is perhaps open to question!
“When we were in Belgium playing in the Champions League, me, Fern (Whelan) and Jill (Scott) did a dance routine to Backstreet Boys… very embarrassing.’’

As most people who grew up in the 90s will testify it was difficult to avoid certain girl and boybands as they dominated television, radio and the charts, and this theme is only backed up further by the brief anecdote Natasha recalls regarding the first record she had, though as she explains, she has developed her music taste slightly over the years since!
“It was probably Spice Girls, (I was) around six years old. I was Baby Spice in the band we had at primary school.
“I like r&b music, Ne-Yo, Chris Brown, Rihanna, Beyonce, Adele, Trey Songz, Usher, James Morrison, Emeli Sandé. I like old school music as well, Luther Vandross, TLC.
“I’m not really into rock music.’’
Natasha’s now-former Everton teammate Toni Duggan previously mentioned on here how she had seen Kylie Minogue perform while she was with England at the Under-20 World Cup in Chile, and Natasha has a few to choose from out of the performers she has witnessed live.
“Beyonce’s concert was unreal, she’s got an amazing voice, can dance and is beautiful. I’ve recently been to see Drake in concert who was boss, and Jay-Z and Kanye West were unreal as well.
“James Morrison and Emeli Sandé in smaller gigs were my favourites.’’
Toni Duggan also discussed how Everton goalkeeper Danielle Hill was in charge of the team’s music at that point, and Natasha praises the Toffees stopper’s sound appreciation. She also has a mention for Toni’s Gloria Gaynor effort as well as the reaction it received from the long-serving and recently-departed manager Mo Marley.
“Dan Hill has good taste in music, she should be a club DJ in Liverpool. Toni was a little drunk on an away trip in Europe and started singing and playing the drums to Gloria Gaynor – Mo wasn’t too impressed!’’

As mentioned earlier, Natasha’s father is the ex-defender and one-time Crystal Palace board member Bob Dowie, while her uncle is Iain, who was actually Charlton Athletic manager while she was playing for the women’s team back in 2006. They have naturally been significant influences for her on and off the field for a very long time and she gives their music choices the seal of approval too.
“They both have decent taste – a bit of soul music!’’
Having been born in the city of Abu Dhabi in the United Arab Emirates, Natasha represented both Watford and Fulham in the early part of her career and spent a year with Charlton Athletic before the women’s team initially folded in 2007. Her next port of call was Everton and in May 2010 came an unforgettable game as the Toffees defeated English women’s football’s dominant force Arsenal at Nottingham Forest’s City Ground in the FA Women’s Cup final. Natasha gave the Blues the lead with a close-range left-footed finish but despite Kim Little’s equaliser Everton went in leading at the break after Gunners skipper Faye White diverted Toni Duggan’s cross into her own goal. Julie Fleeting restored parity at 2-2 and the game was deep into extra-time when Brooke Chaplen played Natasha in behind the Arsenal backline. With 119 minutes on the clock she lifted the ball past the advancing Emma Byrne to seal the glory – a magical moment for Natasha and all involved with the team.
In the second season of the FA Women’s Super League the top three remained the same as the previous year as Arsenal and Birmingham finished ahead of Everton. For Natasha the campaign was one of considerable frustration but she has some words for Mo Marley who last month announced she was leaving her position as manager after ten years, citing the demands of combining the role with her commitments as England Under-19 coach.
“For me it’s been very disappointing as I’ve been carrying an injury all season, so I haven’t been at my best. As a club I think the team are frustrated with another up-and-down season.
“Mo leaving was very sad news, but all the girls wish her the best of luck with the FA and her new career.’’

Stepping into the breach will now be Marley’s previous assistant Andy Spence and he will be looking at how Everton can replace the gap left after Fara Williams, Becky Easton and Natasha chose to move on. Defender Easton, who has represented England frequently in her career, had spent over a decade with the club in two spells and another international, midfielder Fara Williams, has joined Liverpool along with Natasha, who outlines her reasons behind the decision.
“Training full-time, good coaching staff, quality players coming on board, good financial backing and an exciting future.’’
Natasha was given her opportunity with the England team in 2009 and has represented her country on three occasions. The hope for her ahead of next season in the FA WSL is a return to optimum fitness as she bids to be a vital part of new Liverpool manager Matt Beard’s side as well as returning to the international reckoning.
“(During the) off-season I’m going to sort my ankle out and get myself 100%. I then hope to have the strongest season yet and get back into the senior (England) squad.’’
The inaugural season of the FA WSL in 2011 was a highly significant step for the women’s game in this country and the progress has continued at a rate of knots with the second campaign and the interest in Team GB at the summer’s London Olympics. On a personal level it is the individual approach that stands out as the biggest change Natasha has noticed since the league was put in place.
“You have to be more professional off the pitch on a day-to-day basis as the competition is stronger in the league.’’ 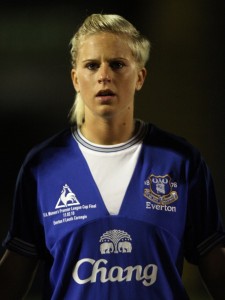 The developments this week look to have signalled a step in Natasha’s career that she can see as an intriguing chapter and opportunity following her five memory-filled years with Everton. As she becomes a Liverpool player she chose the teammates from her career so far who she would select as the best to play alongside herself in my regular feature to finish off the interviews on here. The choices are centred around the Toffees, with the exception of her defensive choice who is an England regular and a current Göteborg player in Sweden.
“Dan Hill, goalkeeper – a good shot-stopper and good technically. Defender – Anita Asante, strong and composed.
“Midfielder – Michelle Hinnigan, plays it all the time. Striker – Karen Burke, ex-England player, me and her are Messi and Xavi in 5-a-side when we play in Liverpool!’’