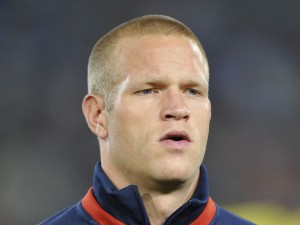 While there was nothing typical about Vancouver Whitecaps captain Jay DeMerit’s staggering rise from the English Sunday league to the World Cup, the USA defender and former Watford star does derive inspiration from a song universally associated with triumphing against the odds.

The 32-year-old was the recent subject of the film ‘Rise & Shine: The Jay DeMerit Story’, a picture I reviewed last month on here together with my interview with Nick Lewis, the documentary’s co-director, producer and writer as well as Jay’s friend from their college days.

His path took him from his home of Green Bay, Wisconsin, to travelling around Europe with his friend Kieren Keane in search of an opportunity in the professional game, and after many false dawns he shone in a friendly for non-league Northwood FC against Championship Watford.

The Hornets’ manager at the time Ray Lewington consequently took a chance on Jay and less than two years later the American was a goalscorer and ‘Man of the Match’ as Watford under Aidy Boothroyd beat Leeds United 3-0 at the Millennium Stadium, Cardiff, to win promotion to the Premier League.

He would reach the pinnacle of international football in 2010 as he played every minute of the USA’s four games in the World Cup in South Africa as they reached the last 16 before losing out to Ghana after extra-time in Rustenburg.

His former manager Boothroyd makes reference in ‘Rise & Shine’ to how Jay’s story is reminiscent of Rocky Balboa’s so it is perhaps a little surprising that one of the tough centre-back’s favourite songs is not one associated with the Italian Stallion, though it is not a million miles away!

“I think Eminem’s ‘Lose Yourself’ will always get a fire under me,” Jay said. ”It resonates with what I try to be about.”

That of course is the lead track from the film ‘8 Mile’ and is built on the theme of grasping the moment, something never more applicable than with Jay, and his character and ability led him to become Watford captain during his time at Vicarage Road.

He is now in Major League Soccer as skipper with the Vancouver Whitecaps, however this does not necessarily mean he is a major player when it comes to the pre-match dressing room music!

“The locker room music on any team I’m on is the one who gets their iPod to the dock the quickest that day! It makes for a great mix, I’m always that person that says ‘I like everything’ but I really do.

“There isn’t a type of music I won’t listen to. The first CD I bought was Green Day’s ‘Dookie’ album – their energy is fantastic.”

Joining Watford in 2004 was a simply crucial moment and Ray Lewington who gave Jay the chance in the professional game actually played for the original Vancouver Whitecaps in 1979 during their stint in the North American Soccer League. 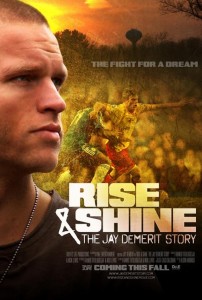 In ‘Rise & Shine’, Jay recalls the moment when Lewington called him into his office to tell him he had impressed in his trial, as well as how he pretended he had an agent when the conversation moved on to talk of a contract!

Although Lewington, now first team coach at Premier League Fulham, would be replaced in March 2005 at Watford by Aidy Boothroyd, Jay acknowledges the vital contribution he made in his career.

“I have great respect for Ray Lewington. At some point a person is going to decide to take a chance on you and I appreciate that he chose to take one on me.”

After Boothroyd came in and steered the team clear of relegation to League One at the end of Jay’s first season at the club they would begin the next season (2005/06) as favourites to struggle against the drop.

As it transpired, the team as a collective overcame that tag to win the Championship play-offs, a magnificent achievement for 35-year-old Boothroyd in his first full-time managerial job and of course on a personal level for Jay.

He headed home a corner after 25 minutes to set the Hornets on their way to a 3-0 success over Leeds in front of 64,736 in the Welsh capital, in a dreamland scenario for ‘the American abroad’.

The following season in the top flight was not quite so fairytale-esque and the team eventually finished bottom of the Premier League, although an appearance in the FA Cup semi-final against Manchester United was certainly commendable.

Losing previous season’s top scorer Marlon King to injury was key, as was having to sell creative force Ashley Young to Aston Villa in the January transfer window, although overall Watford never acclimatised to the famously unforgiving division.

“Our biggest factor in promotion was our belief that Aidy instilled in us as a team – nothing was going to stop us. We were then way too inconsistent to stay in the Premier League, consistency is the key to that league.”

Featuring 32 times and scoring twice in his season at England’s top level, Jay would play another three campaigns in the Championship for the club before leaving in 2010 with 213 appearances, 10 goals and undoubtedly a firm place in supporters’ affections.

In the last World Cup, the US team led by Bob Bradley drew games with England and Slovenia before Landon Donovan’s last gasp winner against Algeria secured their place as group winners, setting up a last 16 date with Ghana and condemning England to second place.

During that opening game against England, Jay came up against Wayne Rooney and was a key part of the 1-1 draw, forever to be remembered for keeper Robert Green allowing Clint Dempsey’s effort to squirm out of his grasp for the Americans’ equaliser.

What I asked Jay was when you are taking part in the biggest footballing event on the planet does the enormity of it really register with you or are you in somewhat of a protective bubble?

“Playing in the World Cup was a culmination of four years of hard work, so when it finally came I just decided to relax and enjoy it all. It was worth every second.”

Although the last 16 was as far as the States progressed in South Africa, Jay’s international stock (buoyed already by the 2007 CONCACAF Gold Cup success) rose and he has 25 caps to his name thus far, the most recent of which came in Nashville last March against Paraguay.

In the Whitecaps inaugural season in the MLS last year (though they played their first professional game in 1974) the natural difficulties of an expansion team were in evidence and the team came in last place overall.

Nevertheless, it is a learning curve and with Scottish head coach Martin Rennie brought in for the new campaign and their second season beginning next month at home to fellow Canadians Montreal Impact, there is excitement and anticipation for Jay.

“The Vancouver move has been great. I knew the challenges going into it, and it has been a challenge at times but this club is something special.

“The city, the fans and the organisation are all an amazing set-up. When we get the soccer on the field on the same page as the other three great things will happen.

“I’ve enjoyed playing alongside the veterans of the MLS like Joe Cannon and Jon Thorrington, they know this league very well and are great assets to help you learn. Some of the foreign flavours like Eric Hassli have been fun to watch as well.”

Jay studied for an industrial design degree in his days at UIC (University of Illinois at Chicago) and while his life has turned full circle since his days sleeping on the floor of his friend’s attic and suchlike, he maintains much of that same artistic passion from his younger years.

“Outside the game I try to do as much as possible, I still have an interest in art and many other creative outlets along those lines. I own a tech company called songwhale that has been an interesting thing to be part of, life off the field is fun too!” 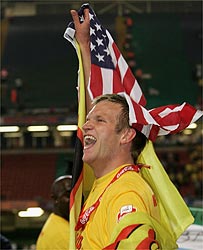