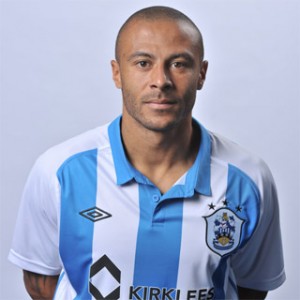 Huddersfield Town’s Danny Cadamarteri exploded into professional football with Everton in the 90s and while he has tailored his game over the years his music taste has experienced an even more drastic adaptation.

The 32-year-old is one of a clutch of seasoned campaigners at the League One promotion hopefuls, although there was a time he was a kid blaring out a choice of tunes that you may not hear in the home dressing room at The Galpharm Stadium today!

“The first album I ever owned was The Care Bears! I had it on LP and I had a little record player that I used to play it on, the first album I bought myself was ‘Now 21’, I think I was maybe 13. 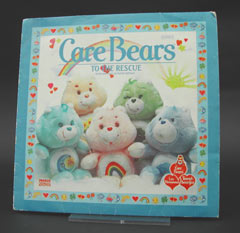 “My favourite music is r&b – I particularly like LSG and Joe Thomas and I really connected with a song by Joe called ‘What If’. I’m not a big fan of rock music, although I do quite like Bryan Adams and Aerosmith.”

Simon Grayson’s Terriers side features a mix of young talents and long-standing players in the game, including midfielder Scott Arfield, a Scot who has spent time singing in an indie band and someone who straddles the boundary of young and old in his sound choices according to Danny.

“I think Scott Arfield has the weirdest taste in music, not really for the style but for the fact that he loves all the music that was out probably 30 years before he was even born. I can’t work that one out as he’s only a young pup too!

“Quite a few of the lads listen to similar music to me, all the brothers, Antonio (Anton) Robinson and Oscar Gobern, also Danny Ward and Jack Hunt are into the r&b scene too and want to be brothers! We have an IT guy at the club that is in charge of the dressing room music and his taste is pretty good so it’s not too bad.

“A bit of rap, a bit of hip-hop, and a bit of old stuff squashed in here and there for the pensioners in the squad – Alan Lee, Ian Bennett, Gary Naysmith, oh and me!”

West Yorkshireman Danny is a former England Under-21 international known primarily for his Premier League days, but his stays at a number of other clubs have inevitably led to many stints performing the singing initiation in front of new teammates.

“Every club you go to you always have to sing for the team so taking into account that I’ve played for ten clubs you can imagine I’ve done it a few times. On my return to Huddersfield (former manager) Lee Clark even made me sing again but I just did a few impersonations as I like to do a few different accents.”

Always brought up with Danny is his goal for Everton in the Merseyside Derby with Liverpool in October 1997, a game in which Reds defender Neil Ruddock also scored an own goal.

Everton won the Goodison Park game 2-0 and striker Danny, who had only turned 18 a few days previously, robbed Bjørn Tore Kvarme of possession and evaded Ruddock to finish past David James.

“Breaking through was obviously my most memorable time of my career – the beginning. It’s hard to recollect the feeling as the chance in the derby opened up but the feeling of the roar from the Goodison faithful as it hit the net will never leave me – it was a numbing feeling.” 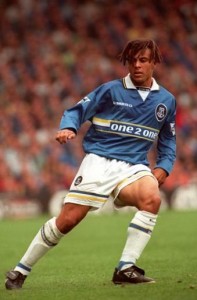 Having made his debut for the Toffees in May 1997 against Ruud Gullit’s Chelsea his form caught fire in the early throes of the 1997/98 season with league goals against eventual champions Arsenal, strugglers Barnsley and Sheffield Wednesday, as well as the derby day strike mentioned and one in the League Cup against Scunthorpe United.

There was considerable hype surrounding Danny and his potential but after a brief loan at First Division Fulham and a further ten Everton goals he left Goodison in 2002, returning to his native West Yorkshire with Bradford City.

After representing fellow White Rose clubs Leeds United and Sheffield United he had a second spell at Bradford for the 2005/06 season.

A very brief stop at Grays Athletic ensued before a move to Championship Leicester City and a subsequent loan with Doncaster Rovers.

After two years with Huddersfield from 2007 to 2009 he moved to the Scottish Premier League with Dundee United, spending eighteen months at Tannadice Park. 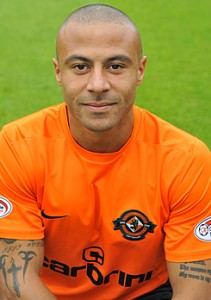 Last year’s January transfer deadline day heralded a return to Huddersfield as Danny joined up with Lee Clark’s League One promotion chasers, scoring on his debut against Exeter City.

After two more goals in the final run-in he featured in the play-off semi-final first leg with Bournemouth as well as the final at Old Trafford where Town lost out to Peterborough United.

This season he has experienced time out of the team before a more frequent flurry of appearances in recent months, firstly under Lee Clark before former Leeds boss Simon Grayson took over in February.

“It’s difficult when you’re not playing, you train hard all week hoping to be in the eleven come Saturday and when you’re not in the eleven it’s as though there is no light at the end of the tunnel. I’ve had experiences like this before in my career and you always have to remain positive, train hard and make sure you’re raring to go when your opportunity comes about.

“Under Lee Clark I had a long spell on the sidelines and it was difficult to get in as quite simply the team was playing well, strikers were scoring goals and wingers were creating chances so the manager could not really disrupt the team. The manager always knew I was waiting in the wings and come Christmas time with a few injuries he gave me my chance and I felt I took it and stayed in for a run of 12 games.

“At that point it felt like my patience and hard work had paid off and it felt refreshing to be back in.”

As I alluded to previously with his step up from The Care Bears to r&b, Danny, who has gone on to spend time out on the wing, has had a transition out on the field too!

“I think as I have got older I have obviously become a lot wiser on the pitch. I’ve learned how to conserve my energy better to be able to use my pace for longer and I’ve also learned to manage my body a lot better which has helped me to cut out all the little niggling injuries I used to pick up.

“I’m currently having the longest spell in my career without serious injury.”

With four games of the season to go Huddersfield are 4th in League One, all but assured of a top-six place but also out of the running for an automatic promotion spot, meaning it is to be a third successive tilt at the play-offs for the club.

The 37 goals of striker Jordan Rhodes have caught everyone’s attention, with 14 also contributed by Lee Novak, and Danny is optimistic that they can bury the last two defeats to come on strong in the final reckoning.

“With regards the promotion campaign we are obviously disappointed to not be contesting the top two places and unfortunately our inconsistency has cost us. We now need to pick up some momentum leading into the play-offs and make sure we give our chairman and fans what they deserve – promotion.”

In my last interview I gave a first run to what I think could prove an interesting feature – the player in question’s 5-a-side team of their best ever teammates, including themselves as one of the line-up.

Danny’s choices feature four notable stars from his Everton days, including the former England international and midfield genius who was my own first footballing hero.

“My 5-a-side team would be: Neville Southall in goal as he was an amazing keeper, a massive presence between the sticks. Richard Gough at the back, again loads of experience but a real quality defender.

“I would have two in my midfield – Gazza (Paul Gascoigne) with his genius and creativity to lay them on a plate for me and also entertain the crowd, and I would have Joe Parkinson in the middle to protect Gazza as he would definitely wind up some of the opposition with his skills and trickery and his cheeky banter. Big Joe would be our security guard and he can play a little too, or should I say a lot, and obviously I would be up top running amok!”

This Saturday sees the FA Cup semi-final meeting of Everton and Liverpool at Wembley so how does the one-time teenage Evertonian hero of the Merseyside Derby think this one will play out?

“I think it will be a real spectacle, I know Liverpool have a few suspensions but that’s going to add to the spice. The Toffees are going to go into this game with a real point to prove after suffering two derby defeats and how better for the Blues to rub it in with the Reds than to finish above them in the league and knock them out of the cup too?”