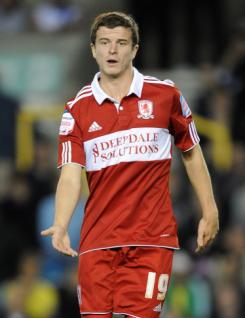 Having just turned 21 last week, Middlesbrough’s Scottish winger Andy Halliday is still in the burgeoning stages of his career but away from the game the ex-Rangers youngster and house music enthusiast is rapidly becoming an Ibiza veteran.
The Glasgow-born wideman was signed for Boro by Gordon Strachan back in 2010 after his highly impressive emergence with Livingston had helped them on their way to lifting the Scottish Third Division title. Now in his third season at the Riverside Stadium, he is somewhat on the cusp of Tony Mowbray’s first team picture at present and continuing to work at earning his chance of an extended run in the side. During the time off for the players in the summer the long-renowned destination of Ibiza ticks all the boxes for him and it works perfectly in tandem with his specific music love.
“It’s my favourite place in the world, I go every summer with my mates from back home and next summer I’m doing the full seven weeks of my break! It’s not just an unbelievable party island there’s loads of beautiful beaches and nice restaurants as well, hopefully if I’m lucky I’ll earn enough money through football to get a place in Ibiza.

“I’m a massive lover of house music, especially deep and tech house. There’s too many producers I like but Defected and Hot Creations are labels who have a lot of good producers at the moment.
“I’d have to say my dislike could be David Guetta. It’s not that I don’t think he’s good at what he does it’s just it’s really commercial which isn’t my style, and people who don’t follow house think that his music in the charts is house, which it’s not.’’
With his season ticket for the White Isle secured, Andy is in a good position to give his view on a decent range of different venues and DJs when discussing his Ibiza favourites.

“The new Ushuaia venue is pretty special, but my favourite is DC10, Space, Amnesia and Pacha are all good clubs too. I’ve seen a lot of top sets such as Solomun at Sankeys, Maya Jane Coles at Space, Sven Vath at Cocoon and Amnesia, Defected nights at Pacha, but my favourite was Jamie Jones’ Paradise nights at DC10.’’
Considering that Ibiza ranks so highly in Andy’s affections, the soundtrack identity of his first CD bought is not too surprising. Fans of the film will not need reminding but the plot saw Harry Enfield and Kathy Burke’s well-known teenage characters on a pilgrimage to the party isle, with appearances from some very reputable DJs on the soundtrack.
“I think it was the ‘Kevin & Perry Go Large’ soundtrack, which would have made me 10 years old.’’
Having heard all about Andy’s sound choice credentials, just who could it be when it comes to manning the changing room playlist at Middlesbrough?
“Me… standard! I think most quite enjoy the music as we have quite a young squad.
“Just now I’ve been playing some stuff by the likes of Miguel Campbell, Hot Since 82, HNQO and MK. The lads love Miguel Campbell ‘Something Special’ or a classic Azari & III ‘Hungry For The Power (Jamie Jones Ridge Street remix)’ to get them pumped for the game.’’
Andy being entrusted with the pre-game music at the Championship club despite his young age appears to be something of a seal of approval for his choices and there is a homegrown ex-England international defender at the club who shares his favourite genre.

“Jonathan Woodgate is a big lover of house, he’s got a villa in Ibiza town so he’s definitely one of the better ones, along with Jason Steele and Seb Hines. Surprisingly I’ve got quite a few of the older lads into it this season with the likes of Grant Leadbitter and Stephen McManus complimenting on a few tunes, thankfully there’s not too many with bad taste.
“Lukas Jutkiewicz loves his indie gigs and he also plays the guitar so he’s a big music fan.’’
It takes some harking back to his days as a youth team player for Andy to recall the most memorable of his teammates’ musical renditions in front of fellow players but has he ever had to take on the daunting challenge himself?
“No thankfully, I can’t imagine it would be a nice feeling. I’ll always remember a young lad at Rangers when I was a kid being made to sing, he went on to sing Ultrabeat ‘Pretty Green Eyes’ – classic.’’
Following on from his time at his boyhood club Rangers, Andy ventured to West Lothian in 2006 to join Livingston and he made a big impression during his stay at Almondvale. The 2004 Scottish League Cup winners had encountered huge financial problems and after relegation from the SPL in 2006 and the noose of administration around them Livi were demoted to the Third Division in 2009. The club won the title in 2009/10 by 15 points and Andy’s 14 goals that season at the age of just 18 were a considerable contributory factor in the success. He left the club at the end of the campaign for Middlesbrough but his appreciation for Livi is tangible. 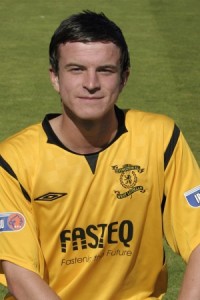 “I owe a lot to Livingston, I had many good memories there and it was a great changing room of lads who I still keep in touch with. Making my debut at 15 and scoring a few goals were good memories, winning the league being the best and the weekend that followed.’’
He played 13 times for Boro in his debut season in English football in 2010/11, scoring in a 3-3 draw away at Ipswich Town. Last season only brought one appearance for the Championship side but he had an eight-game loan spell with League One Walsall in the winter. During that time he got to know forward Alex Nicholls (now at Northampton Town) who mentioned Andy’s music taste in his interview on here back in January.
“Nicks was one of the lads I got on with really well in my time at Walsall and luckily the majority had a soft spot for their house music. It’s a really close bonded club with a great bunch of lads and I wish them all the best for the future.
“People like Manny Smith, Jamie Paterson and Olly Lancashire all liked their hip-hop and r&b but were open to some house. I can say there were a few sour faces between the older lads such as Andy Butler and Jon Macken when our iPods were in – I think they’re more old school!’’
While running a final rule of past teammates’ music preferences, Andy described some of the good, as well as his view on what he sees as the somewhat limited tune selection of a Scottish international midfielder currently featuring in Major League Soccer for the Vancouver Whitecaps.
“In all fairness it’s more my good mates in football like Scott Allan at West Brom, Craig McDowall at Alloa and Kal Naismith at Rangers who have good taste. Barry Robson just had no room for consideration with any modern music, he stuck to his Stone Roses and The Smiths and that’s it, which in all fairness I do like but he was just a one-trick pony regarding his music!’’

On the field so far this season Andy has featured three times for Boro, in a league defeat at Barnsley and also in Capital One Cup victories over Gillingham and Preston. After ten games of the Championship campaign Tony Mowbray’s side are 11th but just a point off the play-off places and Andy maintains optimism that he can play a more frequent role for the club in the not too distant future.
“I’ve obviously not played as many games as I’d have liked but I’m still young and learning all the time and I’m happy with my performances this season when I’ve played. You’ve just got to stay positive and realise I’m still very fortunate to be at a club like Middlesbrough, hopefully it will come sooner rather than later.’’
Establishing himself on the pitch is the principle objective but in his list of biggest interests away from football there is one that takes precedence, and he has a desire to take it further than simply plugging in his iPod in the changing room.
“Without a doubt music – I’m in the process of buying some decks with a couple of my DJ friends going to teach me the basics! I’ll be taking it quite seriously as it’s something I have a big passion for and I’m hoping it can lead to something in the future… you never know.
In the regular concluding question Andy named his 5-a-side team (including himself as a prerequisite) of the best he has worked with in his career thus far and there is a local feel to the Boro-dominated backline, as well as a tartan influence moving forward!
“Goalkeeper Jason Steele, I think he’ll get an England cap one day. Jonathan Woodgate (in defence) has pulled on a Real Madrid strip which speaks for itself.
“Barry Ferguson (in midfield) whose career I’ve always wanted to emulate captaining and winning trophies at my boyhood heroes Rangers, with Robert Snodgrass (winger/forward), who I’ve known since I was young, completing the five.’’