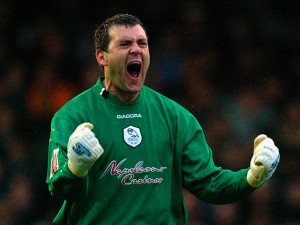 Loyal to the music he loves, Rochdale’s goalkeeper and coach David Lucas has had his say on the musical divide at the club, first mentioned by teammate Joe Widdowson in his interview with this site last month!

The former Preston North End and Sheffield Wednesday stopper moved to Spotland in the summer and along with captain Gary Jones he forms the ‘more experienced side’ of the squad’s musical taste spectrum.

“Myself and Gary Jones are Metallica-heads so I think it is a case of the young boys being brainwashed by Simon Cowell’s nonsense for far too long. The musical divide is a case of uneducated young chavs not having a clue about real music, 99% of them wouldn’t know Neil Young unless he was on FIFA 12!”

Preston-born, David spent almost a decade with his hometown club at the start of his career and was also notably one of the play-off heroes of Sheffield Wednesday’s 2005 promotion from League One.

Given that his Dale colleague defender Joe Widdowson described r&b as his favourite style of music, David’s preferences could quite conceivably be considered the polar opposite.

“My least favourite genre is r&b, it just isn’t for me. I would say my favourite music is good old-fashioned rock ‘n’ roll, including heavy metal, rock, blues, soul, indie, with the occasional bit of hip-hop and pop.”

The 33-year-old has also been impressively committed to his visits to Glastonbury over the years, although he is now seeing the dying embers of this particular love affair, as he explains.

“Festival-wise it’s all about Glastonbury for me, this year was my tenth and I think my last. I first went in 1999 and jumped the fence and it has been a massive part of my life ever since.

“This year however I found that I had seen and done it all before and I think it’s time to try something new.”

The question of his first ever record purchased instantly conjures up images of a former England footballing maestro singing in his tracksuit with folk rock band and fellow Geordies Lindisfarne!

During his time with Preston, David had loan spells with Darlington and Scunthorpe United before going on to feature in North End’s 2001 Division One play-off final defeat to Bolton Wanderers.

After joining Chris Turner’s Division Two Sheffield Wednesday initially on loan in Autumn 2003, David would be brought back to The Owls in a second loan spell that season before making the move permanent in summer 2004.

Despite a couple of untimely injuries during the 2004/05 season he made 41 appearances as the Hillsborough club won the League One play-offs, playing a crucial role in the success under Paul Sturrock.

David was carried off injured in a 1-1 draw at Peterborough United in October 2004 and was expected to miss around six weeks, but returned in less than half of that time to line-up against Stockport County.

The significance of this is that without him Wednesday had lost at both Bradford City and Swindon Town and drawn at home to Chesterfield.

When he returned, he formed the last line of a resolute side that would propel themselves from mid-table mediocrity to firmly nestle themselves in the top 6 over the next few months.

Unfortunately a routine catch in the March win over Blackpool resulted in a knee injury which would rule him out of the remaining nine games of the league season, of which the team won just one, temporarily slipping out of the play-off places at one point.

The sight of the then-27-year-old returning to take his place in front of over 28,600 for the play-off semi-final first leg against Brentford in May was a welcome relief for the excited yet hugely nervous Owls fans.

After a 1-0 home win, the team won 2-1 in the second leg at Griffin Park to assure themselves of a Millennium Stadium date with Hartlepool, although there was a tie-defining moment for David in the away leg.

With the aggregate score at 1-0 to Wednesday, The Owls were sustaining a lot of pressure from Brentford and on 25 minutes Bees striker Deon Burton swivelled to send in a low volley which looked for all the world to have levelled matters.

David had been moving the other way yet reacted in what can only be considered as world-class fashion to produce a simply astounding save down to his left – a truly pivotal stop.

“My save from Deon is something I have a very clear memory of. I remember thinking as I saved it that I had made a meal of it but watching it back on TV I think I was a bit harsh on myself.”

Wednesday triumphed in the final and as discussed in my interview with Lee Bullen, the togetherness of that team was cited as paramount to the success, as David concurs.

“The team spirit we had that year was the reason we won promotion, good players with great togetherness is a winning combination. Lee Bullen must take the credit, he was one hell of a captain and we would all have done anything anything for him.”

On the matter of music at S6, as former skipper Bullen mentioned in the July interview manager Paul Sturrock used to play his favourite song ‘Teenage Dirtbag’ by Wheatus whenever he got the chance!

“I love Paul Sturrock but his musical tastes were shocking at best! I can’t really remember that much about the music at Wednesday except that me and James Quinn liked a bit of Rage Against The Machine.” 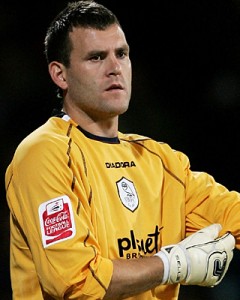 In the Championship the following season the club staved off relegation to finish 19th but David suffered a knee injury in a clash with Millwall in February 2006 which would cruelly be his last for the club as his contract expired at the end of that campaign.

The Hillsborough club still hold a special place in his thoughts to this day and he appeared against them last season in a 2-1 win for Swindon Town in a League One game at The County Ground.

“Sheffield Wednesday will always be a big love for me. I was honoured to be number one at such a big club, I was heartbroken to leave Hillsborough.

“Playing against Wednesday last season was something I enjoyed and I think I played well. It was good to be on the same pitch as Weavs (Owls keeper Nicky Weaver), truly one of the nicest guys in football.”

Also representing Barnsley and Leeds United before his 2009 move to Swindon, David has returned to his native area of the country and has played three times for Rochdale this season so far, including in the 2-0 Carling Cup win over Premier League Queens Park Rangers.

“It is great to be back in the North West full-time. Rochdale is an opportunity to see how I feel about going into goalkeeping coaching when I retire and I must say I am loving it even more than I thought I would.

“Outside of football my life is concentrated on my family, whether that be school, football training or whatever. I have a few irons in the fire regarding business ventures but they still concentrate on goalkeeping coaching.”

Some of David’s favourite songs:

Metallica – For Whom The Bell Tolls

The Beatles – A Day In The Life