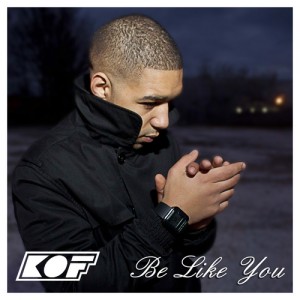 In a present day music scene saturated with nonsensical subject matter and charmless song structures, irresistible UK talent KOF is keeping the beacon of conscious creativity shining. The Liverpudlian spoke to the site in September along with Leicester City midfielder and fellow musician and friend Neil Danns, discussing amongst many other things, his much-loved song ‘Looking At Me’. His next single, ‘Be Like You’ is set for release on Sunday December 11th and the momentum generated from his outstanding previous release continues to accelerate with this gem of a track.

If ‘Looking At Me’ was the perfect tune to chill and raise a wry smile to, ‘Be Like You’ gets you enjoying the vibe as well as thinking at the same time. In the first thirty seconds or so you get the standout line ‘swagger swagger this, swagger swagger that, but what about the music?’, a sentiment that will strike a true chord with music lovers disillusioned by some of the atrociously mundane material infecting the mainstream at present. The tempo is raised for this one but KOF’s soul-laden vocals slot in seamlessly, displaying once again the evolution of his sound and his ability to blend genres. He has talked of how he has now gained a different perspective to the days not so long ago when he would rap about parties and suchlike, and his talented singing goes hand in hand with the relevant concept of the song.

Of course in spreading meaningful messages you can go overboard with it to the extent that a preaching feel is given off, but KOF manages to avoid that by some distance. The balance is just right between enjoying the song and stopping to consider the ideologies being spelled out. ‘Is this how we pictured the flowers the day that we planted the seeds?’. There is more than a modicum of homegrown talent thriving in the UK and further afield and Liverpool has yet another strong competitor in its corner with this guy. He skilfully derives inspiration from many genres without ripping anyone off, and he keeps the spirit of the old days alive while moving steadily with the times.

As outlined in our previous interview, KOF is no ‘new artist’. He has been diligent in his pursuit of making it happen and the aura around him at the moment is richly deserved. His EP is on its way in 2012 with acoustics set to feature strongly and what promises to be an intriguing listen. He is a difficult man to label in terms of genre and that is undoubtedly a positive for a musician who aims to eradicate much of the boundaries that separate audiences. ‘Looking At Me’ brought a new flow of admirers for KOF who was already known in many circles, and just as the supporters were mesmerised by that song’s unforgettable hook, the admiration is huge too for ‘Be Like You’. He has an ever-expanding fanbase, admirably supplemented by some of the industry’s top names such as Trevor Nelson, DJ Target and extremely reputable artists he has worked with including Wiley and Wretch 32, amongst many.

The value of the message in the music has been undoubtedly compromised in recent times in favour of ‘following the crowd’ with scratchy, screeching, endlessly regurgitated tat. All those on his dedicated team who have worked to put this track together can be proud. KOF is one of those protecting the innate magic that music can exude and in a game overflowing with imitators he is an innovator, reaffirming the need to be true to yourself. Be like you.