French-born Guadeloupe international striker Mickaël Antoine-Curier has ventured far and wide in his career but he is back for a third spell with Hamilton Academical and feeling wanted by the Scottish Championship title challengers.

With youth team football at Paris Saint-Germain and OGC Nice behind him, the rangy forward headed for England with Preston North End in 2001. Some impressive goalscoring form for Nottingham Forest at academy level preceded brief stints with seven different English clubs in quick succession.

Since departing for Norway in 2004, his career has taken him to Scotland, Cyprus, Malaysia and Kazakhstan, as well as the international arena with Guadeloupe, a Caribbean region of France. In the summer, he signed for Hamilton Academical of the Scottish Championship and it is the third time he has joined the Lanarkshire club.

He has so far hit the target with five goals in 17 appearances including one in the 3-1 win over Queen of the South at the beginning of the month. Accies are firmly in the hunt for promotion to the Scottish Premiership and are just a point behind leaders Dundee, one of Mickaël’s former clubs, in 2nd place. The ex-Oldham Athletic and Sheffield Wednesday man is thankful for the opportunity to enjoy his football again under a player/manager he knows well from seasons gone by.

“Obviously we’ve been doing very well and still are. We’re planning to be in the top four, in the play-offs, and at the moment we’re in the top two.

“I’m really enjoying it and we’re going for the title. It’s a real family club and everyone looks after each other here.

“I had a great time at Hibs and Dundee, even though it wasn’t looking too good at Dundee with the change of manager. The manager here though, Alex Neil, is my old teammate and he’s got great faith in me.”

As he alludes to, the ending to Mickaël’s days with Dundee in 2010 was certainly not as desired. He had been brought to Dens Park by former Sunderland and Wolves midfielder Alex Rae in 2008 but when Jocky Scott replaced Rae things turned sour for Mickaël. His goal record for the club was extremely good but despite 25 in 47 games he was out of favour under Scott.

With Hamilton selling striker Richard Offiong (an interviewee on this site in the very early days) to Carlisle in August 2009 it paved the way for Mickaël. He signed for Billy Reid’s Accies on an initial loan and scored eight times in 28 games that season. Having returned to Dundee he was one of nine players made redundant with the club in administration in October 2010.

Accies boss Reid was vocal about his admiration for Mickaël however and he brought him back to New Douglas Park in January 2011. After being let go by Dundee while recovering from a knee injury he scored five in 14 for Hamilton before a switch to Cypriot side Ermis in Larnaca.

The third chapter of his Accies tale is going very promisingly and while he and his teammates bid to overhaul Dundee in the title race there is plenty to enjoy. Part of the squad’s routine is a unique punishment for the last player standing in a training exercise. Mickaël explained it when asked if he had ever had to sing in front of teammates in his career.

“I did it once at Dundee but so far I haven’t done it here. You do some competition with the square and the player in the middle trying to get the ball and the loser has to sing.

“The best was Louis Longridge – he knows everything about every song and was singing all the right words. The worst would have to be myself!”

Longridge opened the scoring in that aforementioned win over Queen of the South this month and he was also mentioned by Mickaël when the subject of the team’s music tastes came up.

“We listen to house and dance. One player is really into his urban music – Grant Gillespie.

“Louis Longridge – this guy likes to sing all day!”

The dressing room at each club can be filled with all types of personalities and cultures. Mickaël of course brings his own, thanks to his French heritage and the experience of so many different environments. There were two of his career colleagues who took the disputed honour of the worst he has known for sound choices, in his opinion of course!

“At Dundee, the worst ever was Eddie Malone. He liked all kinds of hippie songs which were very bad!

“Also, at Forest there was Brian Cash. Oh my God, I don’t mind Irish songs but he listened to them a bit too much!”

Mickaël has represented Guadeloupe in the CONCACAF Gold Cup and Caribbean Cup since his debut in 2008 and has been told by head coach Steve Bizacen he will be selected again when scoring frequently at club level. Despite a varied appreciation for music (like everyone on here it seems!) there is more of a US edge to his favourite artists.

“Obviously I like r&b and hip-hop but I like a bit of everything. There’s not one artist in particular – 2Chainz, Future, French Montana, Jay-Z, Rick Ross.

“I dislike dance music, and metal and rock. I don’t mind house that gets the room moving and the grooves going.

“My first CD back in the day was definitely one by 2Pac. I bought two – one was 2Pac and one was dancehall / ragga.”

Prior to returning to Scottish football in the summer, Mickaël had four eye-opening months playing for Kazakh club FC Atyrau, as detailed in a separate interview.

Understandably, he answered without hesitation when it came to naming the most testing country he has been to in his career. He does however have rather more upbeat memories of his surroundings when featuring in the Malaysian Premier League with FELDA United.

“(The most difficult was) Kazakhstan, definitely. I adapted quite well in Cyprus but there were so many problems off the field with things like payment and the chairman was sent to jail one week before the season started.

“I loved Malaysia and Kuala Lumpur is just an amazing place.”

When he freed himself from his nightmare in Kazakhstan he was asked by his agent if he would return to Dundee. His interest was ultimately irrelevant though as neither he nor his agent were given a phone call back. Despite this, he names Dundee alongside Hibernian and Hamilton as the clubs he holds in the highest regard.

The former Kidderminster and Rochdale forward found Accies manager Alex Neil to be a lot more forthcoming. His ex-teammate wasted no time in signing him up and being back on board with the club is a breath of fresh air after some of his overseas ventures.

Those who are familiar with Mickaël’s career path will immediately think of the variety of clubs he has played for. This has provided him with a large degree of learning and life experience of course. The Accies’ number 99 shares some of that know-how and also reveals possible future routes for him in the game.

“It’s not only about talent but the right attitude as well. It’s about working hard and having a strong mind and personality.

“After I retire I’d love to carry on with football. You never know but I don’t think I’d like to be a manager, I think it’s a very difficult job.

“I could see myself as a scout and going out to study players. I’d love to be a commentator like Jamie Carragher and Gary Neville.

“I had a shot at it in the Caribbean and I really enjoyed it.” 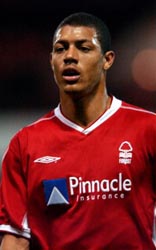 It is not just the beautiful game Mickaël has an interest in. Activities off the field that players get up to can sometimes leave managers worried and this is a prime example! The good news is that the ex-Brentford loanee is saving it for when his boots are firmly hung up.

“To be honest, I’d love to be a pilot. It’s crazy but it’s always been a dream of mine.

“I haven’t had any lessons yet but it’s something I’ve been looking at. You obviously have to be very into it and it’s difficult while you’re still playing football.”

The last question on here requires the player to choose a 5-a-side team of the best they have ever worked with. This should include the interviewee themselves and Mickaël has a pretty wide selection pool to pick from of course. In a striker’s style, he chose from the front and he named two players who just missed the cut. One of these is a centre-back who won 59 caps for England and achieved legendary status at two of Mickaël’s past clubs – Nottingham Forest and Sheffield Wednesday.

“One striker…I’m hesitating over two. One of them is David Johnson at Forest but I think I’ll go with Steven Fletcher who I had a great time with at Hibs.

“One midfielder is a tricky one but it has to be Jermaine Jenas. He was my mate at the time at Forest and he was just amazing to watch.

“When you see him get the ball he’s always looking to thread the ball through to you as a striker. My defender is Michael Dawson.

“He was my centre-half for a year or two at Forest and then I saw him go to the first team. The other defender would have been Des Walker who is a legend.

“On the field he always gave 100 per cent but I stayed with him on a tour to France and even though I was hot-headed he calmed me down and made me work hard. A goalkeeper is really hard to choose.

“I will choose Franck Grandel from the national team because he’s my mate but also because he’s a good keeper. Andy Lonergan, who I was with at Preston, was also amazing as a young kid and he always helped me.”