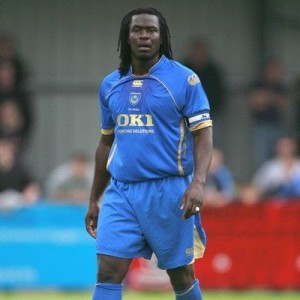 Portsmouth’s well-documented struggles brought the end to former top flight defender and immensely popular figure Linvoy Primus’ 12-year association with the club this year but he enjoyed many great memories in that time, including when two Nigerian internationals put on a vintage display with a distinctly Jamaican edge!

Moving to Fratton Park in 2000 from Reading, the man who would have a stand named in his honour played 219 times for Pompey, enjoying promotion to the Premier League and 113 top flight games. He has also had a superb impact with his community and ambassadorial work, as well as getting involved in starting a prayer group for the players at one point. A large proportion of Linvoy’s playing days at the club were under the stewardship of manager Harry Redknapp, coinciding with numerous established names from far and wide entering the South Coast side’s ranks. It was a duo from this large selection of the club’s international players who secured their place at the top of Linvoy’s list of best off-field performers he has witnessed, with some competition from an Icelandic competitor!

“Fortunately I didn’t have to sing but I chose to on a couple of occasions during a karaoke evening. (I sang) Bob Marley ‘No Woman No Cry’, it got a decent clap and cheer at the end.

“The best were John Utaka and Kanu, they sung a Bob Marley song and it was amazing. The funniest was Hermann Hreidarsson’s Elvis impression, he was superb, he had the outfit and glasses.”

Linvoy’s 2007 autobiography discusses his and Portsmouth’s rise and how his finding of Christianity helped so significantly in his career and his life as a whole. A decade ago he and fellow ex-Premier League defender Darren Moore worked together to start ‘Faith And Football‘ with the Charity Director Mick Mellows, and the subject area certainly manifests itself in Linvoy’s own musical choices.

“I like listening to all sorts of music as my kids have all sorts on their iPods, when I’m on my own in the car I love worship music and gospel. Again I would say I like a lot of artists as most have a unique sound but Bob Marley, Sam Cooke and Jay-Z are up there along with Beyonce, but there are many more.

“As both of my parents are from the West Indies, reggae, soca and calypso were listened to a lot, I also liked the chart stuff as well, listening to Radio 1 in the mornings before school. It has changed a bit as I love worship and gospel but I’ve found a couple of radio stations online who play reggae and soca worship songs.

“The first record I bought was a Michael Jackson single, I can’t remember how old I was but I remember going into a record shop after watching a Saturday morning show and hearing the song and going out to buy it.”

There tended to be a fairly ruthless school for prospective team DJs in the changing room during Linvoy’s playing days at Pompey, with only the true diamonds reigning supreme in these scenarios!

“Most of the music was generally the same but occasionally someone would try something different and if it was shocking the iPod would go missing. The rule was: ‘if you’re confident enough to put your iPod on you’d better have good tunes’!

“I was at Pompey for ten years so there were plenty of DJs playing their tunes. When I first arrived it was Aaron Flahavan, he was into garage, house and hip-hop.

“Nigel Quashie was next with house, r&b and hip-hop, Gary O’Neil with hip hop and r&b. After that we had so many players that we had many different iPods and types of music.”

Receiving his start in professional football with Charlton Athletic, Linvoy made the breakthrough to the first team but after a handful of appearances he was allowed to leave in 1994. He then signed for Barnet, where his teammates would include future top flight players in the shape of Northern Ireland goalkeeper Maik Taylor and Scottish frontman and current Crystal Palace boss Dougie Freedman, and he would go through quite a learning process at the club on and off the field. Emerging from his spell at Underhill as a Barnet hero he would join Reading in 1997 where he worked again for a short time with ex-Barnet manager Terry Bullivant. After relegation in 1998 to the third tier Linvoy spent two more years with the Royals before the biggest juncture of his career arrived when signing for Portsmouth, who were managed by current Stoke City boss Tony Pulis.

In his third season at the club in 2002/03, Pompey (by now under the guidance of Harry Redknapp) stormed to the Division One title with Linvoy featuring over 40 times in a campaign that was the precursor to the heady Premier League days. After three successful relegation battles came the 2006/07 season when the club finished 9th with wins over the likes of Champions League finalists Liverpool and eventual league champions Manchester United (and not for the first time either). Although a Sheffield Wednesday supporter I also vividly recall Pompey’s win over West Ham United on Boxing Day 2006 when Linvoy scored both goals in a 2-1 victory at Upton Park – winning a lot of points for my Fantasy Football team in the process! 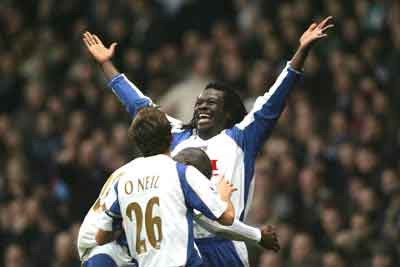 The club won the FA Cup in 2008 but a knee injury had kept Linvoy out of action and sadly restricted him to just one more appearance for Portsmouth, as a substitute at home to Sunderland in a 3-1 win in May 2009. He had however played 10 times that season on loan back at his first club Charlton, scoring against Sheffield United for the Addicks. He announced his retirement in December 2009 but continued to work with the club in an ambassadorial role, also enjoying a testimonial in 2010 and the fantastic honour of the Milton End at Fratton Park being renamed ‘The Linvoy Primus Community Stand’ for the 2010/11 season.

“I had an amazing time as a player at Pompey and being involved in some, if not all of, the greatest moments in the club’s history will be something I will always remember. I think the fans recognised something in me that they see as a trait of somebody from Portsmouth and that is to never give up and to give 100%.

“When I was told a stand was going to be named after me I was blown away and really humbled that this was done. It’s something that I couldn’t see happening to me but I really appreciate it.”

Portsmouth have struggled to say the least of late with relegation from the top flight in 2010 after becoming the first Premier League club to enter administration. The off-field troubles have run extremely deep and another points deduction as a result saw them relegated to League One at the end of last season. Pompey face a continued battle for their very survival ahead of this coming season and Linvoy, who left the club earlier this year as part of mass redundancies, speaks from his own experience of the situation.

“At the moment the outlook isn’t great with liquidation a real scenario, so it’s a waiting game to see what the people who make the decisions are going to do. The only way I think the club can go forward is to have a strong infrastructure from bottom to top.”

Among Linvoy’s endeavours (details of which can be found on his website) is ‘Pedal for Primus’ as he takes on Faith and Football’s yearly cycling challenge of 175 miles over the weekend of the 7th to the 9th of September.

“The bike ride coming up is for my charity Faith and Football, it’s our annual fundraiser and goes a long way to allowing us to fulfil the projects we run in Portsmouth, Plymouth, Birmingham, Barnsley and more recently Farnham.” 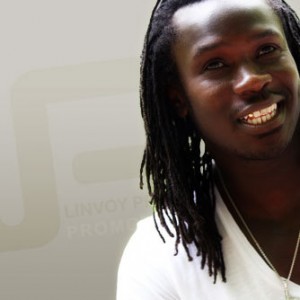 Always to be fondly remembered by those connected with Portsmouth, he has left a lasting impression on the club and has his place cemented in a wonderful period in Pompey history. There were talented teammates and distinguished opponents along the way so let’s end with the best Linvoy ever faced out on the pitch, as well as the cream of the crop from his side of the battle.

“Thierry Henry was my hardest opponent as you knew exactly what he was going to do and most of the times you couldn’t stop him. (On his 5-a-side team of his best ever teammates) I need to pick two teams here as I’ve played with so many good players.

“In all honesty I could name five more teams as I’ve had the pleasure of playing alongside so many.”