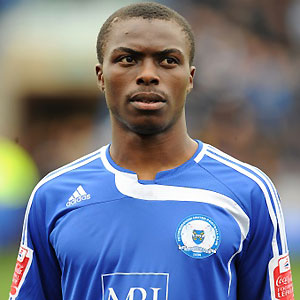 Peterborough United’s Gabriel Zakuani has battled to be a success in football, while in a different arena some of his long-time friends have too, as they now feature firmly amongst the premier names of homegrown music.

The 25-year-old centre-back was born in Kinshasa, capital of the Democratic Republic of Congo (then known as Zaire), moving to London at a young age as he explains.

“I came as a youngster, I was about six years old so it wasn’t as difficult because I was just a kid excited about the opportunity.”

He is currently involved in some particularly interesting ventures outside of football, as we will hear about, but his professional career on the pitch started in East London with Leyton Orient.

His debut for The O’s arrived as early as March 2003 in a Division Three away game at Bournemouth while still a 16-year-old, and he went on to represent Fulham and Stoke City before his move to Peterborough.

With four promotions in his relatively short career to date allied with his status as an important figure in The Posh backline, Gabby has made significant progress in the game, as have some of his well-known companions when it comes to music.

“I’m from London so I have a lot of friends in the industry who grew up where I grew up. Dizzee Rascal, Lethal Bizzle and Tinchy Stryder stand out as I’ve been very familiar with their music from early on and have a friendship with them.

“My favourite though is 50 Cent, pure genius! I’m not a fan of opera or country music but I would give anything else a chance.

“The first I bought was probably a Nas album called ‘Nastradamus’, I must have been 10 or 11 at the time.”

The video features Dizzee in a dream sequence as a judge on an X Factor parody, ‘The Flex Factor’, and The Streets’ Mike Skinner, Radio 1 DJ Reggie Yates and now-hugely renowned magician Dynamo also make guest appearances as well as Gabby.

“I know Dizzee quite well, we’re good mates and we used to go out quite a lot. It was more of a favour to him as he just asked me, I really enjoyed it.

“It’s the only shoot I’ve been in and probably the last.”

Music is of course an area in which the defender has a vested interest and he has also experienced some time on the decks in the capital in the past.

“I used to do a bit of DJing when I lived back in Tottenham and it’s always been a secret passion of mine.”

The 2005/06 season was Gabby’s final campaign for Leyton Orient and he played 50 games in total that year as the team finished 3rd in League Two to win promotion under manager and former midfielder Martin Ling.

The O’s also eliminated Chris Coleman’s Premier League Fulham in the FA Cup Third Round in January 2006, winning 2-1 at Craven Cottage, a game where Gabby impressed alongside John Mackie at the back.

Coleman was suitably impressed and paid Orient £1million with a further £500,000 dependent on appearances for Gabby that summer, although he played just twice for the Cottagers, in the Carling Cup and FA Cup.

His first-team football in his three years with Fulham came away from the club, in two separate loan spells with Stoke, as well as in one with Peterborough. 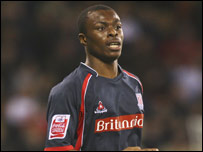 In the 2007/08 season in his second loan at The Britannia Stadium, he was part of the Stoke team who won promotion to the Premier League, making 20 appearances in total, 19 of which were in the league.

The following season Darren Ferguson brought him to London Road and he played 37 times as Peterborough won promotion to the Championship, scoring once, in a home game with Tranmere Rovers.

The move was initially a loan one and had been made permanent in January 2009 for a six-figure fee estimated to be over £500,000.

In the Championship in 2009/10, The Posh failed to ever get to grips with the step-up and finished bottom, 15 points from safety, with Mark Cooper, Jim Gannon and Gary Johnson all spending time in the manager’s hotseat following Ferguson’s November departure.

Last season, after Johnson left his position in charge in January 2011, Ferguson returned to the club and guided the team back to the Championship via the play-offs, Gabby’s fourth career promotion.

He made 38 appearances, including all three of the play-off matches, and one of the goalscorers in the 3-0 final win over Huddersfield Town is currently in charge of the team’s sound system.

Northern Irish midfielder Grant McCann’s skills apparently lie not only in that fantastic left foot of his!

At present, The Posh have 22 points from 16 games and are 11th in the Championship, three points off the play-off positions.

“We are doing very well and I think right now it’s just about showing we can compete in this league and everything else is a bonus.”

Gabby played his 14th game of the season in Saturday’s 3-2 home win over Derby County and scored his first goal of the campaign in a defeat to Leeds in October.

Over in the United States, his brother Steve, a fast, exciting winger and former Arsenal youth, has been starring for Major League Soccer’s Seattle Sounders.

Steve founded Kingdom Hope in 2010, a non-profit organisation which provides camps, clinics, a scholarship fund and football academies, and he has stated that he wants to help people realise their dreams in the same way that people intervened in order to help him to.

“Steve’s a top player with incredible ability,” Gabby enthused. “I’m so proud at the way he has adapted to the professional game, he’s been a huge success in the States and he’s really enjoying it over there.”

The LMFAO track recreates the line with ‘every day I’m shufflin” and an even further variation of this has captured Gabby’s fans’ imagination too, as he explains the appeal of his own Twitter hashtag and brand dedicated to his committed defensive performances.

“I do a lot outside of football, I’ve branched out my ‘#EverydayImTackling’ brand and sold out 3,000 t-shirts and currently started with hoodies for the winter. I’ve created an app out on Apple, ‘EverydayImTackling’ app, which will be out very soon.

“The idea is just off scratch, people have taken to my catchphrase so I’m taking advantage, everything I make goes straight to charity. Also I have a radio show on Thursday, available to hear through www.theposhlive.com.

“I’ve also got a big project out next summer where I will visit Africa for charity – ‘#TackleAfrica’.”

Gabby has a newborn son with his partner Shanice, named Trendy, although some publications have recently printed incorrect reports that the name derives from Twitter, whereas in actual fact it is to reflect Shanice’s work in the fashion industry.

Some of Gabby’s favourite songs: