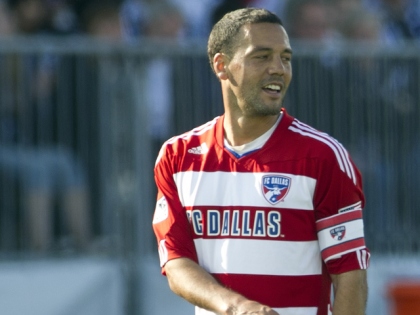 Spending a thirteen-year career in the United States’ Major League Soccer and Mexico’s Primera Division, Daniel Hernandez has seen hip-hop become a firm favourite with teammates in both nations.

The 34-year-old defensive midfielder now captains FC Dallas who are riding high in the Western Conference of the MLS under the guidance of head coach Schellas Hyndman.

Although from Tyler, Texas, Daniel is of Mexican descent and has played in the country of his heritage for Necaxa, Puebla and Jaguares de Chiapas.

In the US he has spent time at Los Angeles Galaxy, the now-defunct Tampa Bay Mutiny, MetroStars (now New York Red Bulls) and New England Revolution, before finally making it back to his home state with FC Dallas in 2009.

“Over the years hip-hop has definitely taken over the locker rooms,” he said. “By request of all natonalities!”

“In Mexico, surprisingly, you don’t hear a lot of Mexican music in locker rooms, it’s usually techno or hip-hop.”

Despite hearing so much hip-hop at the teams he has been at, the music which Daniel’s family loves has remained close to him.

“Growing up my Dad always listened to Mexican music. Usually the dances, weddings, quinceneras we would go to with our parents there was always Mexican music and it has always stuck with me.

“Mariachi music like Vicente Fernandez, r&b such as The Isley Brothers would be my favourite music. The first record I bought was by Kool and the Gang, probably in fifth grade?”

Daniel’s current team play at Pizza Hut Park and he reveals that the boss Schellas Hyndman has certain rules which also spread to the music played in the home dressing room.

“Most of the guys listen to hip-hop but you will catch a couple of them every once in a while listening to techno, I can’t stand techno. Our locker room usually gets hip-hop play by request of everyone and by whomever has their iPod out.

“It’s usually songs with no cussing though because Coach Hyndman doesn’t like that in the locker room.”

Tinie Tempah has recently been flying the flag for UK music in America but Daniel is unfamiliar with all but one of the British artists making an impact Stateside.

“Honestly I don’t keep up with UK artists, no disrespect. The only one I know is Leona Lewis and she can sing her butt off!”

Turning to matters on the field, Dallas have had to deal with the loss of talismanic Colombian David Ferreira to a broken ankle since April but have recovered remarkably, currently occupying 2nd place in the Western Conference.

As captain Daniel has performed resolutely in a midfield alongside Andrew Jacobson and Eric Alexander and is understandably in high spirits.

“It’s been a great season so far, I couldn’t be happier. Personally I couldn’t be prouder to be part of such a great team and at home with my family.

“Personally I just want to stay healthy and as a team we want to continue to get results, make the play-offs and win a championship, in that order.

“I want to play as long as I can, then I’m not sure. Coaching is always an option, college or pro.

“I’m hoping to set up some sort of businesses before I finish my career as well. I have a couple of commercial properties at present, I’m starting a clinic tour in Texas and I stay busy with charities and the community.”