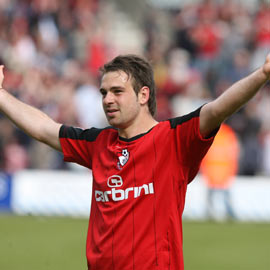 Striker Brett Pitman returned to his first club Bournemouth on a permanent basis this week, joining the numerous Cherries old boys who have found their way back, and whether it is the fortunes out on the pitch or the changing room personnel, some things never change!
The 24-year-old was a hero with the Dorset side in his previous stay and has been back on loan with the League One outfit from Bristol City since November, scoring three times in seven games since. Manager Eddie Howe and assistant Jason Tindall also made a noted return to the club when they departed Championship Burnley back in October to resume the job they had left in January 2011. Bournemouth’s form since then has been simply magnificent as they have gone 16 games unbeaten in total, winning 12 and cementing their place among the League One promotion chasers. Brett has started the last six games and although the club has made significant strides forward in the way it operates since he left in August 2010 there are some aspects that remain familiar, including one of the prominent figures at the club. The individual in question is truly synonymous with the South Coast side and gave his own interview for this site last June, and Brett reveals the frontman is a dominant force when it comes to the pre-game music.
“At the moment Fletch (Steve Fletcher) is in charge and he’s got a lot of variety and good tunes on his iPod, which is also his pride and joy! We all picked a song to go on a team playlist that he put together and I chose ‘Aston Martin Music’ by Rick Ross.’’

After hearing about the team playlist I was intrigued about the tracks that would have gone on it and the aforementioned Steve Fletcher took the time to give me a glimpse into some of the choices that the Cherries players made, and they are as follows:

Brett’s choice of Rick Ross for the playlist gives a strong indication of the music he tends to favour, although how serious he was being when he gave the latter example of his sound selections is a slight mystery!
“I don’t like things like Justin Bieber, I like a lot of hip-hop – The Game, 50 Cent etc. It’s more that type I’m into, I don’t mind the Spice Girls either.’’
The Jersey-born forward was in attendance at a well-known festival back on home soil and he has also seen a couple of world-famous performers in the town he has spent the bulk of his career in.
“I’ve been to Jersey Live and I’ve also been to watch Rihanna and 50 Cent in Bournemouth.’’
When thinking back to the first CD he ever bought Brett conjured up a Canadian band and although the exact title eluded him it is quite possible that the act’s first UK hit ‘How You Remind Me’ could be the one, which would have made Brett 14 at the time! 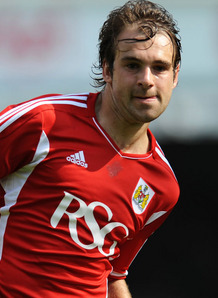 “I think it may have been Nickelback, I can’t remember which one it was though.’’
Bournemouth currently sit 7th in the League One table (kept out of the play-off places on goal difference by Swindon and MK Dons respectively) and a summer signing from Brighton & Hove Albion is the man Brett names as being responsible for the best singing performance from a fellow pro he has seen. He does not quite rate his own rendition of a much-covered 70s song so highly however and he has a similar disparaging view on the music tastes of an ex-NEC Nijmegen duo at the club, with one of these the cousin of the current Barnet manager Edgar Davids!
“Tommy Elphick was very good and he sang the same night as me. I had to do it when I re-signed at Bournemouth and I sang ‘I could move a mountain when my hand is in your hand’ (‘You To Me Are Everything’) – it was terrible!
“The two Dutch lads (Lorenzo Davids and Frank Demouge) at the club listen to some terrible stuff – no one knows what it is they’re listening to!’’
There were no questionable musical preferences of Brett’s now-former Bristol City teammates that came to the forefront of his thinking but a London-born Ghanaian international winger at Ashton Gate did get a favourable mention.
“Yeah there’s a few good ones. Albert Adomah loves his music and he’s always dancing around to something.’’
On the subject of the Robins, Brett leaves Bristol City after over two years in the Championship in which he netted 20 goals, with 33 league starts and 44 substitute appearances in that time. His first season at the club (2010/11) saw him score 13 times in the second tier after also registering a hat-trick for Bournemouth in a 5-1 win over Peterborough in the opening month of the campaign. Last season brought a further 7 goals in 37 matches as the side led by Keith Millen and latterly Derek McInnes staved off relegation. With limited game time this season, Brett made his return to Bournemouth after becoming a huge favourite in his opening stint at Dean Court (currently the Goldsands Stadium).
After first appearing for the Cherries as a 17-year-old he began to make his way in the first team in the 2006/07 and 2007/08 seasons. The following year would signal his true breakthrough though as his 17 goals were instrumental in keeping the club in League Two despite all the odds stacked against them. A 17-point deduction after a 10-point hit the year before for entering administration had been overcome and Eddie Howe was then able to lead Bournemouth to promotion back to League One in 2010. Brett had scored a superb 26 league goals as the side finished 2nd in League Two and he stepped up to the Championship with Bristol City in the early throes of 2010/11.
Now finally a full-time Cherries player once more, Brett is delighted to be back at a place he enjoyed so many goal-laden memories and this week his loan deal became a three-and-a-half-year contract.
“I’m really enjoying being back and playing every week and being involved. It’s a good squad, a good manager and it obviously helps when you’re winning.
“Winning breeds confidence and it’s a good feeling around the place at the moment.’’
Manager Eddie Howe is loved by the Bournemouth faithful after his years as a defender for the club before his success as a young manager. In October he surprised some by dropping down a division from his job at Championship Burnley to return to the South Coast with assistant Jason Tindall (also an ex-Cherries defender). At the time the club were struggling in the lower reaches of League One but there was undoubted quality in the squad. Since Howe has come in the team have realised that potential with a stunning run of 16 games unbeaten to launch them up towards the play-off picture and also an FA Cup tie at Premier League Wigan Athletic this weekend. The turnaround may be staggering to some but Cherries fans know all about the managerial credentials of Howe and there is also little doubt that there is something special that makes people want to come back to the club. Besides Howe and Tindall, Steve Fletcher, Josh McQuoid, Stephen Purches, Richard Hughes, goalkeeping coach and distinguished ex-custodian Neil Moss, and of course Brett himself, have all returned to Bournemouth having left the club at some point.
Steve Fletcher spoke on here about Eddie Howe’s love of the Norwegian pop group A-ha and it was something I also discussed with Burnley keeper Lee Grant in October. There was one name and song choice from the Bournemouth team playlist that I did not mention earlier and it belonged to the gaffer himself. The track was Timbaland’s ‘The Way I Are’ and Brett confirms that the manager tends to get a free pass when it comes to criticism for his music!
“No he doesn’t get any stick. I don’t think a lot of the lads know he’s an A-ha fan though!’’

With his immediate future now fully resolved Brett will be concentrating on the club’s promotion challenge in the final few months of the 2012/13 season, but even though he is still 24 for a few more weeks he put together the 5-a-side team (including himself as stipulated) of the best players he has worked with in his career so far. There is Premier League and World Cup experience in his line-up as well as a defender now with Crawley Town and a Cardiff frontman and fellow goalgetter.
“David James in goal for obvious reasons – an international who’s still very good. Darren Anderton (midfield) – another international and that speaks for itself, he’s technically the best player I’ve played with.
“Shaun Cooper (defence) – also technically very good and he works very hard which you need in 5-a-side. Nicky Maynard – me and him up front would score a lot of goals I think.’’