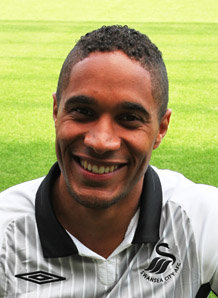 Welsh international defender Ashley Williams has been a truly vital component in Swansea City’s elevation to become Wales’ first Premier League club, so he is as well-placed as any to judge the music taste around the Liberty Stadium, including that of his manager Brendan Rodgers.

The imperious 26-year-old centre-back initially joined the Swans on loan late in their 2007-08 League One-winning campaign and was crucial at the heart of their rearguard over their three seasons in The Championship, capped by last season’s play-off final success over Reading.

Former Watford and Reading boss Rodgers took over as Swansea manager in July 2010 and is often cited as learning a great deal from working with Jose Mourinho, during his time in charge of Chelsea’s youth team and also eventually the reserves.

It is maybe not quite as clear though where the Northern Irishman gets one of his musical preferences from, although according to Ashley his choice is good enough, especially when compared with some of the other tunes around the dressing room.

“He (Rodgers) never gets involved but I know he is a fan of Usher, he told us one day, so that is very creditable I think! In the changing room we listen to old school garage, probably one of the Pure Garage CDs, I’m not sure who chose it but we all like it.

“Tom Butler has the worst iPod, just depressing stuff on there. Also the Spanish boys have a dodgy taste in music, we don’t want to listen to flamenco thanks!

“I’m a fan of all music if it’s good, but you will mostly find hip-hop, r&b and old school garage on my iPod, favourite artists would be Jay-Z and Rick Ross. The music I used to listen to (growing up) was 90’s hip-hop classic stuff, early Jay-Z, Nas, 2Pac and Biggie.

“The first record I ever bought with my own money was Notorious B.I.G. ‘Mo Money, Mo Problems’.”

In the last three seasons alone Ashley has played in 149 games for Swansea, scoring 10 goals from the back and winning a place in the PFA Championship Team of The Year in each of the last two seasons.

The former West Bromwich Albion youth has however had to battle and earn his way up all through the football ladder, a decade ago he was plying his trade with Staffordshire club Hednesford Town before moving into the Football League with Stockport County in 2003.

Ashley, who describes John Barnes as his all-time footballing hero, will finally get his chance in the Premier League next Monday when Swansea visit huge-spending Manchester City in their top-flight curtain-raiser.

“It has been very difficult, when I play in the Premiership this season I will have played at every level of professional football and it’s been a lot of hard work and down-times but that’s what makes it so good now. When I run out at the Etihad Stadium about to face Manchester City, the richest club in the world, I will have the biggest smile on my face knowing my journey, I wouldn’t change it at all.”

Stockport County, the club who gave him his first shot at league football suffered relegation out of the Football League last season for the first time in 106 years.

Ashley is saddened to see the demise of The Hatters but now under the management of former Liverpool and Germany midfielder Dietmar Hamann, he believes they can begin the long road back.

“It’s a shame what has happened there. It is a great football club and it will take a lot of hard work and dedication to get that club back into the Football League where it deserves to be but I think it can be achieved.” 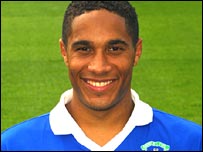 Ashley’s consistency over recent years has seen international recognition with Wales and although born in Wolverhampton, his family background ensured that it was not a bizarre experience lining up recently against England.

“No it wasn’t strange, my family are Welsh and I have lived here for three years. I stood proud for my grandfather and sung the national anthem. Wales gave me a chance at international level and I will be forever grateful for that.

“We have a very good team if everyone can stay injury-free, that is the key for us. Our aim is to qualify for a major tournament.

“On a Wales game someone will just bring an iPod in and it will be on shuffle, mostly hip-hop and r&b. The last couple of games it was Gareth Bale (who chose it) and before that it was Sam Ricketts.”

Aside from preparing himself to play against the likes of Man City’s latest big-money Argentine Sergio Aguero, Ashley has launched his own soccer camp aimed at teaching children character through football.

“The idea came when I was on a plane going to Kenya thinking how privileged I was to be able to do things like that. So I had the idea to start a soccer camp to teach kids character and what is needed to be a professional person.

“To let the kids know they can be whatever they want to be literally, we try to promote their dreams, whatever they may be. We use soccer to help get that across and the early stages have been very successful, we ran a camp at Easter and are currently doing one now in the summer holidays.

“We had such a good response in Tamworth we have branched out and opened one in Swansea also. The feedback from kids and parents has been excellent, we have even had reports of kids telling their parents to swap chips and fizzy drinks for pasta and squash, so if we can help one kid that’s enough.”

Community is of huge importance for Ashley and he also established a charitable project at the end of last year with his wife Vanessa.

“A lot of my focus away from football goes into the soccer camp. I have also set up a charity with my wife called WillsWorld and we have been fortunate to put a smile on the faces of a lot of under-privileged kids, so when the football finishes for the day those are my two ventures.”

The new season in the top league is almost upon us and the memory of Swansea’s thrilling 4-2 victory over Reading in May to clinch promotion is still fresh in the mind as thoughts of the biggest names and stadiums also start to come into focus.

“We are very proud of what we achieved, it will sink in when we line up for our first game against Man City I guess but we will never forget the memories of that day for as long as we live. Excited would be a word to sum up my emotions right now.

“We have a saying in the team that not one player is better than the team and that was what got us promoted last season. We have a lot of weapons in that changing room but the team is the main quality we possess.”

Some of Ashley’s favourite songs: