Striker Anthony Modeste is one of the main reasons why 1899 Hoffenheim are among the Bundesliga’s biggest entertainers this season and the former Bordeaux and Blackburn Rovers man is part of a dressing room that is just as lively as their matches.

As 2013 drew to a close, Hoffenheim headed into German football’s winter break knowing they had treated spectators to numerous goal-laden encounters. Despite the exciting nature of their games there is a shared desire within Markus Gisdol’s squad to add a lot more to their win tally.

After 18 games of the Bundesliga season, the Sinsheim side are 13th in the table but with only four victories thus far. Their first game back after the break did not go to plan as they were beaten 4-0 by Nürnberg but the creativity and attacking ability in the ranks is at least cause for optimism for the months ahead.

The club’s leading scorer is Brazilian midfielder Roberto Firmino with 12 in all competitions and the 22-year-old has been at the hub of the lion’s share of positive work in the final third, contributing six assists in the league. Strikers Kevin Volland and Anthony Modeste each have eight goals in total and former France Under-21 international Modeste is enjoying a new lease of life in Germany.

The 25-year-old ex-Nice youngster’s three years with Bordeaux ended in the summer and he enjoyed an explosive start to his Hoffenheim career. Anthony scored six goals in his first seven Bundesliga games including a double in the 5-1 win away to Hamburg in August.

Music is the theme on this site and Anthony gave a little bit of insight into the preferred sounds on the team playlist.
“Usually we listen to a lot of hip-hop in our changing room. Especially after our training sessions it can get loud.”

Anthony is a name who may be familiar to followers of the English game after his time in the Premier League with Blackburn Rovers. The Cannes-born frontman was signed by Steve Kean for the final few months of the 2011/12 campaign but was unable to help Rovers stay in the top flight. He featured nine times but only three from the start, making his debut in a 1-1 draw with Everton at Goodison Park.

He naturally got the opportunity to learn English in greater depth during his stay in the North West and two English-language artists are amongst his favourites too.

“I listen to music quite a lot. At the moment hip-hop is at the top of my list, especially songs of the two US rappers, Tyga and B.O.B.”

Starting out with Nice, Anthony came to prominence in a loan with Angers of Ligue 2 in 2009/10. He scored 20 league goals and subsequently joined Bordeaux, reaching double figures in front of goal in his first season. Another loan move last season was the reinvigoration he was looking for as he scored 17 times for top-tier Bastia, helping the Corsican club to 12th in Ligue 1.

When asked which track he would like to re-record if given the chance, Anthony went for a hip-hop act from his homeland who reunited last year to release their fourth album.

“If I ever had to cover a song it would probably be ‘Block Party’ by the French group ‘Psy 4 de la Rime’. They are from Marseille and I like to listen to them.”

Francis Gillot allowed Anthony to leave Bordeaux last summer and he signed a three-year deal with Hoffenheim. Since promotion to the Bundesliga in 2008, the club has had some notable forwards in the past few years such as Chelsea’s Demba Ba and Stuttgart’s Bosnian goal-getter Vedad Ibisevic. It was a nervy campaign last year as Hoffenheim preserved their top-level status only after defeating Kaiserslautern (who finished 3rd in the second tier) in a two-legged relegation play-off.

Anthony is aiming to provide the goals to avoid such a scenario this time around and he has connected well with German Under-21 international striker Kevin Volland. The ex-1860 Munich player has also impressed Anthony with his tune choices and he named him as the most noteworthy at the club in this regard.

“Here in Hoffenheim that has to be Kevin Volland. He has clearly the best music taste.”

While Anthony continues to target an upturn in goal count for the Rhein-Neckar-Arena team he will be hoping to catch the attention of France coach Didier Deschamps. At 25, there is plenty of time still for him to try to make the breakthrough for Les Bleus and his early-season form had one or two discussing the prospect. 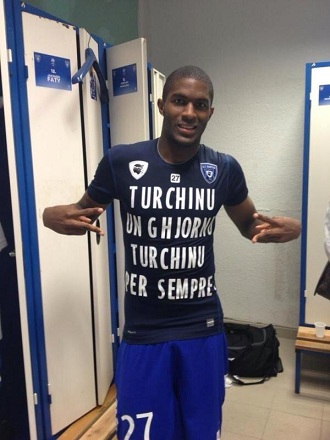 To conclude, I asked Anthony to put together a 5-a-side team of the best players he has worked with in his career so far. Usually this line-up includes the interviewee and they choose four former teammates but Anthony has put himself on the bench!

His goalkeeper is a 27-year-old who played alongside him at Nice and is currently rated as one of the best in England and arguably Europe too: “Hugo Lloris.”

For a defender, he opted for a centre-back who has one cap for the French national team and was a colleague of Anthony’s at Bordeaux prior to moving to Lazio in 2012: “Michaël Ciani.”

There are two players in Anthony’s midfield, the first of which has appeared at four major tournaments for Czech Republic and is currently on loan from Bordeaux at Serie A club Catania: “Jaroslav Plasil.”

Also supplying the ammunition in this team is a highly-rated 21-year-old Marseille midfielder who he got to link up with in his spell with Bastia: “Florian Thauvin.”

He completes his five with an Ivorian international who scored for his country in the 2006 World Cup. The forward was with Anthony at Nice and now plays his football for Umm Salal in Qatar: “Bakari Koné.”